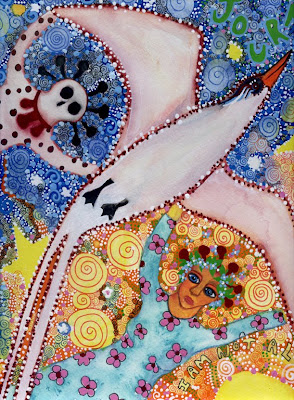 Hallelujah EARTH! Hallelujah loves the natural world around her and knows YOU do too. Hallelujah dances, sings, and playfully celebrates the beauty of the land, sky, and oceans.

One precious part of this earth resides southeast of the United States in the Atlantic, along the Bahamian platform. This island named San Salvador is the farthest island out there in the Atlantic, surrounded by coral reefs and at the “wall”, where the shallow aqua blue waters drop off into the deep, deep mysterious sea.

San Salvador needs our love and attention! Its coral reefs are suffering from pollution, its waters are being over-fished, and the stately ancient sea turtles are disappearing.

Hallelujah soulfully and joyfully believes all of us can make a difference in the actions we take each day. My life’s pilgrimage has taken me past the shores of this island, to its living, beating heart—its children.

I have gone swimming with the children to look at the mermaid’s glass, to give names to sponges, corals, and fish. We have drawn the dolphins, spotted eagle rays, and the birds. We have added colors to these creatures and told stories about how each of us can protect them.

As a way to continue to engage the children of San Salvador with the nature surrounding their homes, I am creating illustrations for the story, “The Misadventures of Maria the Hutia,” written by Ronald Shaklee, a geographer who has been visiting the island for decades. Ron’s main character is a hutia named Maria, an animal that scientists had thought was extinct. Happily it was not.  Scientists found that her kind was still thriving on some smaller pristine islands in the Bahamas. Hutias live! Hallelujah!

In this image you see here, “To the Bahamas,” Hallelujah has invited Amber, a white tropic bird and one of the characters in Maria’s story to transport her and Wandjina to the Bahamas. We are journeying soulfully and joyfully. Observe that Wandjina is in the night, the rich darkness of the subconscious, and I am in the light. Another miracle that has happened is that I have sprouted Wandjina’s crown. My crown is more like pistils of a flower that I cherish for their beauty and potentiality.

I am traveling into the unknown, and I am not alone. Hallelujah asks you to join her on this journey. We, Wandjina and I, are curious about you. We want to know about you and your journey. Inform us of your bearings. Likewise, we ask you to be curious about us, ask us questions, seek answers.

That’s coffee with Hallelujah! Love you!