SEASONS OF OUR SOULS: Distinguishing between the Physical and Spiritual 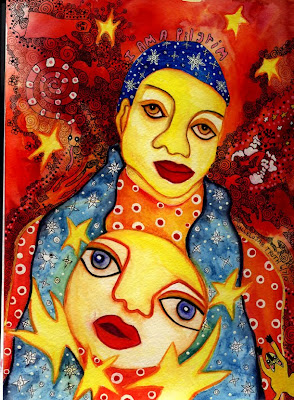 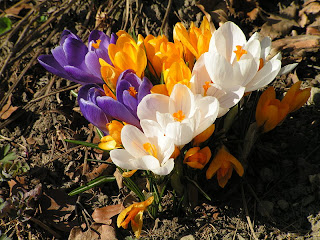 Our death is our wedding with eternity.

What is the secret? God is One.

Hallelujah for the 4 seasons! As PILGRIMS, our annual journey through fall, winter, spring, and summer echoes the SEASONS of our SOULS. Our BEINGNESS relies on the PHYSICAL world to teach us about change, about transformation….

At the end of winter, when I see purple, yellow, and white crocuses jumping up out of the thawing, ungreen earth, I EXPERIENCE joy! My heart beats faster. The flesh of these vibrant flowers crouch low to the earth but reach out to the vast cold sky--unafraid. When their season of flourishing is completed, they return to the cycle of dormancy and darkness.

Don’t the SEASONS of our SOULS travel in similar cycles of retreat (death) and repeat (rebirth)? Even as a child, I felt that the PHYSICAL world was TEMPORARY. Moving from military reservation to military reservation every two or three years only emphasized my sense of IMPERMANENCE. “This too shall pass,” I uttered to myself about my current dwelling place—a metaphor for the body-soul relationship. 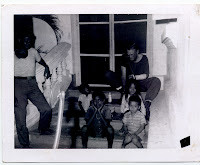 From 1965 to 1967 while I lived at Fort Bragg, North Carolina, the Vietnam War was raging and there were quiet livingroom talks among the adults about friends dying. When I was in fourth grade, we moved outside the gates of this military reservation to Fayetteville because my father, a battalion commander had volunteered to go to Vietnam, where he was wounded during the TET Offensives. 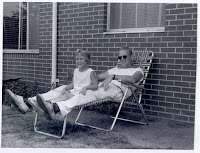 In these childhood days, I used to sit in my father’s lap and stroke the back of his head where the bullet fragment was lodged and replay the story of his heroism (SPIRIT) in Kumhwa, Korea, which earned him the Congressional Medal of Honor. Then I would linger on the romantic story of how he met my mother, a Red Cross worker, during his lengthy convalescence (BODY) in a military hospital in Texas. Growing up in the PRESENCE of a HERO has impact. A hero’s SPIRIT is different from the spirits of other people, or at least it has been made more visible by his or her significantly brave PHYSICAL action.

It was later as a teenager that I had my own simple but profound experience of SPIRIT being separate from BODY. I was 16 and living at Fort Benning, Georgia, and going to the Catholic high school, Pacelli, where in religion class we were making our way through the New Testament of the Bible. We studied passages like Matthew 6:19: “Don’t store up treasures here on earth, where moths eat them and rust destroys them, and where thieves break in and steal.” Religion makes a clear distinction between the MATERIAL and SPIRITUAL world.  And the MATERIAL part is not going to last! 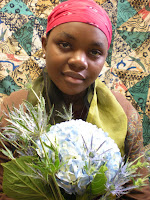 Even though I have continually experienced this sense of the “ephemeral” in MATERIAL things throughout my life, I remember the first time I looked into a school mirror after my body had somehow unbeknownst to me—“blossomed” into a young woman.  I took in a short breath—I did not recognize my outer shell. I saw my blue eyes staring back at me, but the form of my body seemed to be an alien container, a cultural outcome of being in a flesh and blood form. SOMETHING STIRRED WITHIN ME that was not infinitely anchored to this MATERIAL world.

(Photo Right) This is an image of a student from the Global Village School in Decatur. I wanted to take warm, fun photos of the girls and went to the school equipped with hydrangeas and other flowers, as well as quilts to provide the background.

Today, I am 51 rushing onto 52. It is a hot humid day in Decatur, Georgia. The summer solstice, the longest day of the year, is little more than a week away. And I find that my  SEASONED SOUL is watching my aging body.  I see “untouched” photos of myself taken last week by a terrific Atlanta photographer, Shannon McCollum, and observe my wrinkling face, skin discoloration, gray hair, and weight gain. Overall there is strong evidence of PHYSICAL decline.

Engaging with “raw” photos of my PHYSICAL self worries me on several levels. At first, my vanity is ruffled! I see that I am old. Old is not beautiful (correct?). Second, what role does my aging BODY have in this world of perpetually emerging youth? Will I be discarded? Finally, I see evidence of my MORTALITY. I, too, shall die.

Shannon’s photos of me are the result of a favor I did for my friend, Lisa Streib, a talented graphic designer. She is starting a new online business retouching photographs and needed BEFORE and AFTER pictures to demonstrate her considerable skills of tweaking people’s portraits to make their images closer to our media savvy expectations. She is an amazing wizard at that! 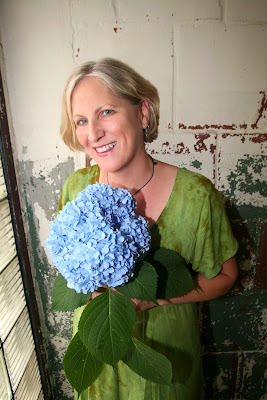 (Above Photo) This is the "after" photo, go to Lisa's website to view the "before" photo of me. You will see additional images of me, as well as other examples of her craftsmanship. I wanted the photo of Hallelujah to "mirror" the portraits of the Global Village School students. (Below Photo, Left) One week after Luis's memorial service at the dojo, the hydrangeas are withering. (Below Image, Right) You see a partially scanned piece of my artwork of two rubber cut prints and drawing. I see Wandjina as a symbol of my "masculine" energy out in the universe on a PILGRIMAGE. 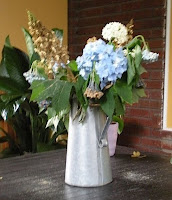 Meanwhile, my participation in her project generated the content for this blog. Because there is MY SPIRIT! This is the SPIRIT of HALLELUJAH! It is this SOUL that is the PILGRIM on the JOURNEY that you are reading about on this blog. I welcome the joys that my BEING in this PHYSICAL world brings. However, I want to detach from the pain and suffering and the inevitable outcome of my DEATH. 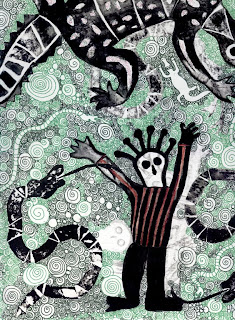 Instead, I cultivate myself by observing the SEASONS of my SOUL. I laugh at my vanity. HA HA HA! Summer is here in the Peach State of Georgia. My SOUL is revitalized, recharged, and refreshed after SOUL BLOGGING with YOU! Perhaps, I am a ripe juicy peach ready to be eaten in the heat of summer!

What SEASON IS YOUR SOUL right now? Blog with Hallelujah and describe your state of being—what does it taste like? Wishing you the FRUIT of SUMMER! HALLELUJAH!