Dear PILGRIMS! Where are you on your JOURNEY? Would you like to join Hallelujah as she SOJOURNS into the Cretaceous of northeastern Australia in search of ART? Her Chiboogamoo gallantly invited her to join him on Australia’s “Dinosaur Trail” to visit the paleo-past. In this part of Queensland, which is now “bush,” there was a GREAT INLAND SEA. Can you believe that where there are now rolling grass plains, crackling clay soils and eucalyptus trees, marine reptiles such as the ichthyosaur, plesiosaur, and kronosaurus swam in vast oceans and left behind their remains along with terrestrial dinosaurs. And much smaller forms of life also left evidence of their existence. Hallelujah found it FASCINATING to traverse time by seeing their ARTISTIC OUTCOMES.

Our first stop along the dinosaur trail was Hughenden, an inland town with a population of 1,500 located 381 kilometers west of the coastal city of Townsville, which hugs the Great Barrier Reef. Mutt, or Muttaburrasaurus, was the first display of creativity we saw as we approached Hughenden’s main street. Dear dino-art, lovingly conveying an ornithopod in careful tones of brown! REALLY, what skin color were those herbivores? 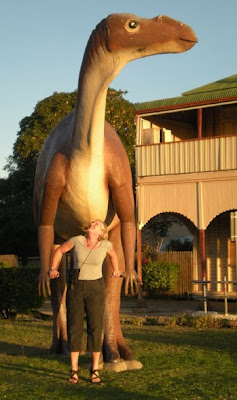 Inside the Flinders Discovery Center one block away, curious visitors can see a replica of the fossil bones of Muttaburrasaurus, standing seven meters tall! Look at his horizontally slanted body and erect tail! Oh! BEAUTIFUL! Hallelujah was thrilled to see older ARTISTIC depictions of dinosaurs in this exhibit. They reminded her of the dinosaur images of her childhood—heavy bodied beasts with tails dragging. ART is informed by SCIENCE (Hallelujah LOVES science)! As scientists learned that dinosaurs moved more like mammals and birds and not reptiles, their tails went airborne! Hence, the ARTISTIC depictions reflect those SCIENTIFIC discoveries. 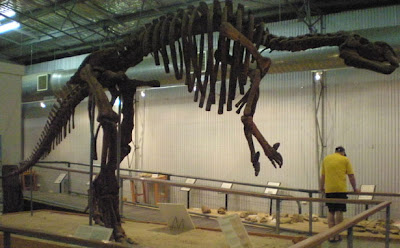 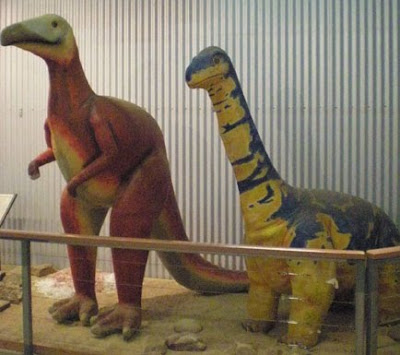 One of the first fossils that greets the careful viewer is a modest block of limestone with embedded treasures! A carefully written note below this fossil rock, which encases “hash,” a conglomeration of bits and pieces from sea life more than 90 million years ago, enthusiastically exclaims: “It is a great example of how we stumble upon fossil strewn rocks which could be classified as art.” This particular conglomerate contains bivalves, gastropods, sharks teeth, clamshells and belemnites (squid like creatures). The exuberance of the educational note continues, “Everywhere you look, there is something wondrous to see and is representative of the rich environment that existed here in north west Queensland.” Hallelujah believes she has found a kindred spirit in the one who wrote this exuberant and informative note! Yes! Everywhere we look, there is something WONDROUS to SEE! 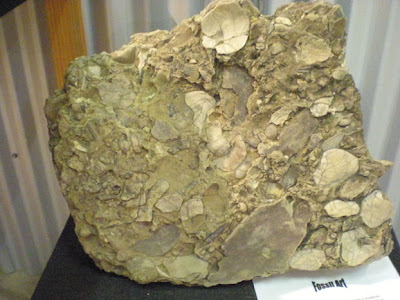 The Flinders Discovery Center presents an artistically dynamic film that explains the formation of the earth, the continents, the seas, and land formations. The flashing lights and booming sounds in this documentary bring us to the specific formation of Porcupine Gorge, a national park about 50 kilometers from Hughenden. A tourist brochure writes about its geological formation in this way, “ Porcupine Gorge National Park has over 500 million years of history, with stories of glaciers GOUGING the land and rivers ERODING soils to create CHASMS in the earth.” Hallelujah has capitalized the exciting words “gouging, eroding, and chasms” for emphasis! OH HALLELUJAH for CREATION! The great waters, land emerging, life forming—here we are PILGRIMS in the VAST UNIVERSE! The ART of FILM conveys this multi-million year process! 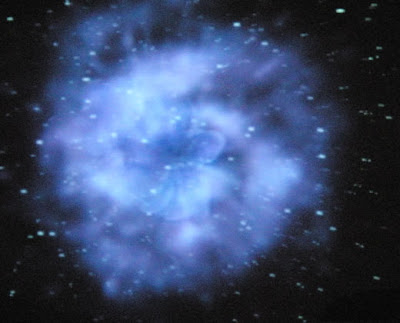 In this small town comprising several blocks, ART has been consciously constructed to honor this Queensland’s town’s role in paleontology. FOSSIL ART grace two walls of the public library! View “Darby the Dinosaur,” also known as “Junkasaurus,” which artists Sam Brown and Terry Lindsay made from found objects to depict Muttaburrasaurus in 1998 for Biennial Dinosaur Festival. Then there is the fantastic ammonite on the entrance side of the library. Hallelujah apologizes for the absence of the artist’s name. Beside the library is a metal sculpture of the pterosaur, “Leannosaur,” which was modeled on a specimen found in Hughenden in 1980. 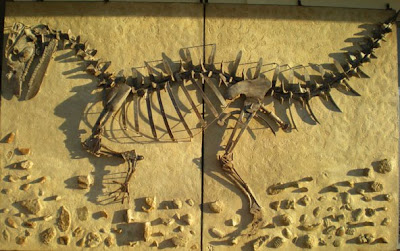 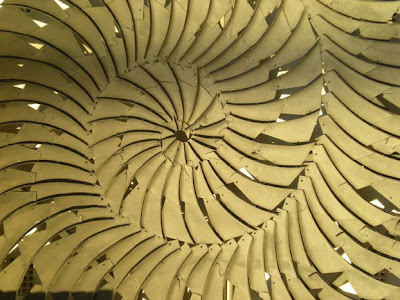 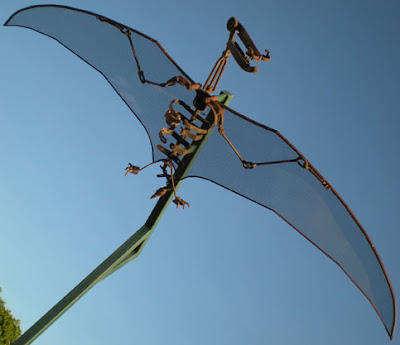 Hallelujah found art everywhere in this western Queensland town! The local café had nurmerous images of Elvis and the owner longs to visit Graceland. The only hotel in town is closed because of safety violations but the local art remains vibrant on its courtyard side. Hallelujah also wanted to show evidence of artistic leanings in the most humble of motels located next to a pub and bottle shop (euphemism for liquor store). Here she poses in front of the GLORIOUSLY magenta painted wall with a box of Weet-Bix, the tasty Australian breakfast biscuit that fed her and Chiboogamoo throughout their western Queensland journey into the Cretaceous! 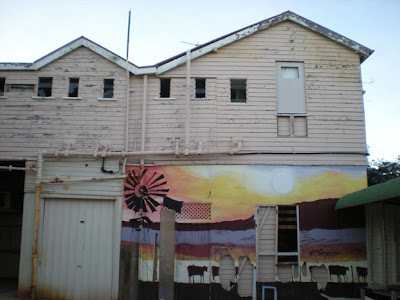 Thank you Hughenden for your jewels in paleontology. Thank you for your ART,  and for feeding my PILGRIM’S SOUL! You have given me EVIDENCE of EXISTENCE from the 100 million years ago! Both in FOSSILS and FOSSIL ART! 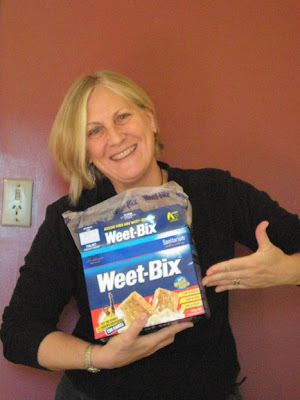