GASPER OF THE GREAT MYSTERY 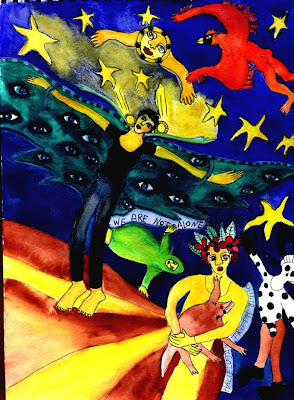 HALLELUJAH FOR THE GREAT MYSTERY! I am a member of the ALCHEMIST TRIBE, affectionate lovers and gaspers of the GREAT MYSTERY. I am in awe of the power of LIFE’S TRANSFORMATION, no matter what it is and where it takes us. Each of us has the privilege of saying “YES” to THE CHANGE. 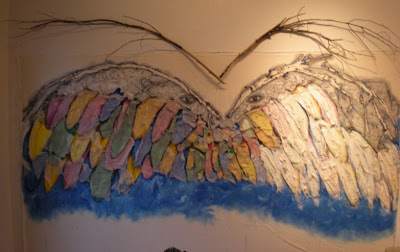 YES—and rolling, flying, leaping into the REALM of the UNKNOWN. One might play with the possibilities—and there are uncountable ones, all the time breathing big gushing gulps of oxygen.

I gulp huge gobs of air when I witness a FELLOW PILGRIM’s work with the MYSTERY. This is the GASP! My stomach twitches and every nerve in my body stretches and vibrates at the observation of COURAGE in ACTION. This is the AFFECTIONATE LOVE! Let me illustrate…. 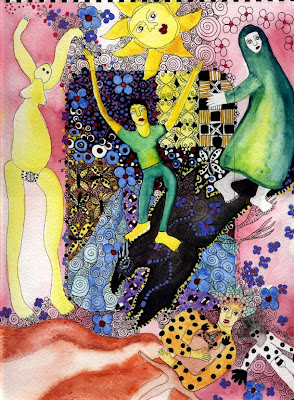 (Two of my watercolors envisioning PILGRIM SALLY's JOURNEY are shown here. Sally is dressed in black clothes similar to the ones she wore in the communal production (THE LUMP JOURNEY) that 12 of us women did with her when she got cancer the first time. Hallelujah is the gasping woman in the striped skirt holding the wallaby.)

My example begins with a journey to the foot of the North Georgia mountains to an artists’ retreat with my friend Sally. It is December. Smokey gray air hovers on the deep greens of the southern pine forests. We are visiting another artist, Cecelia, who has been secluded making art for two weeks. Scarves encircle our necks, the heater blasts. Sally, a northerner, has taken off a layer of clothes. I need each piece of winter garb. We have turned off the music because our earnest exchange requires close attention.

Once at Cecelia’s cabin, we DO our interactive celebration and exploration of our artwork, which I won’t disclose in entirety here since “secret” societies must retain their privacy! However, Cecelia has filled her entire space with canvases, watercolors, and most attention grabbing to Hallelujah—a pair of colorful wings, almost 7 feet long—with eyes and topped with branches! WOW! GASP! AFFECTIONATE LOVE! 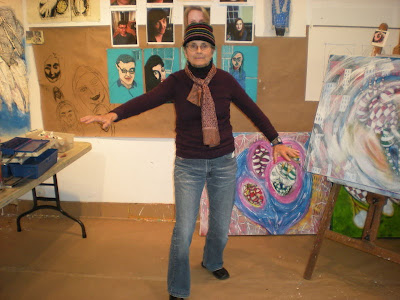 (Sally at Cecelia's cabin in the North Georgia mountains, December 2009. THE WINGS are to Sally's left. You only glimpse a part of them. I did not photograph Sally's work for privacy reasons.)


Cecelia straps these SEEING WINGS on and takes a JOURNEY into the GREAT MYSTERY—the time beyond this physical dimension—DEATH. NEW JOURNEY. AFTERLIFE. PILGRIMAGE. Sally and I are witnesses. The magic wings help Cecelia navigate the UNKNOWN. We ask her questions, and she answers, gleaning the information from her imagined experience in the UNIVERSE. Cecelia’s artful play is the alchemy needed to transform her human experience--body and conscious mind—into a SPIRITUAL experience. All of us are different after this shared imagining. WE HAVE BEEN “THERE”—AND NOT ALONE. 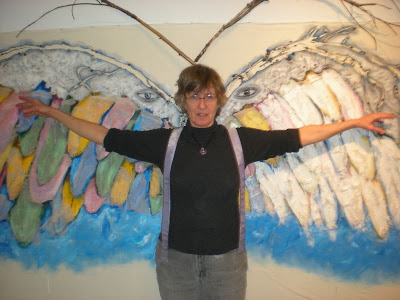 (PILGRIM CECELIA with THE WINGS on her PILGRIMAGE. These wings echo the idea of the ones she made for mother at the time of her mother's death.)

Months pass. It is spring. Cecelia has worked the wings. She has pared down their dimensions in order to make them more “wearable” and efficient to maneuver in the darkness. The feathers have ripened from pastel yellows, pinks, and blues to sturdy red, grays, and blacks. Cecelia flies again--this time in Sally’s studio. The matured wings sober us all.  They represent the inevitability of the death that awaits each one of us. I strap the wings on. How amazing to imagine flying in the life beyond this one! In the community of friends, I feel encouraged to live the good life and to face the good death.

Sally holds the wings but does not try them on. The cancer present in her body makes us all silent. Dammit. Cecelia and I are “playing” with the idea of death so as not to be afraid of dying. For us, our own death is still conceptual. For Sally, who is dealing with cancer for a second time, LIFE and DEATH are becoming big question marks. Fast forward to now…the middle of August. 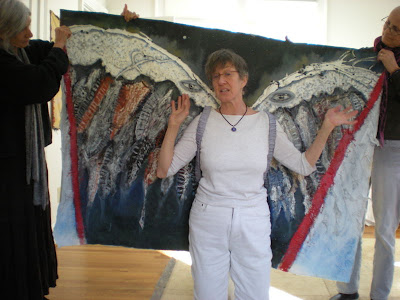 (Because there is no room to tack THE WINGS on Sally's Studio wall, an ART PILGRIM on the left and PILGRIM SALLY on the right hold THE WINGS to support Cecelia's JOURNEY.) 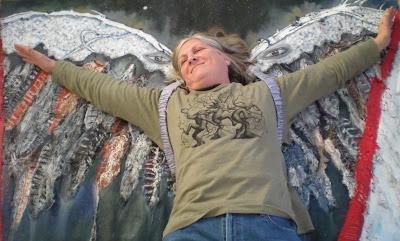 (I try THE WINGS on. I smile out of a disquietude. There is nothing funny about imagining death.)


The summer heat is beginning to subside in Atlanta. Since mid-July, we have known Sally is “actively dying” in her home state of Massachusetts. It doesn’t matter that my calendar has marked, “SALLY RETURNS,” in big sloppy blue ink on September 1st. She isn’t coming back. I’m trying to remember to gulp gobs of air and to conjure the ALCHEMY I know is present to ALL OF US at this moment.

A week or two ago, Sally requested a photo of Cecelia’s wings. Instead, Cecelia sent her THE WINGS. I don’t know if Sally ever actually tried them on, but she described her daughter and granddaughter whooping around in them like magnificent and joyful birds.

Earlier in this blog, I offered to show you an example of what I meant when I said I am the AFFECTIONATE LOVER of the GREAT MYSTERY, especially when I get to witness a FELLOW PILGRIM’s work with the MYSTERY.

SALLY PILGRIM has caused me to GASP in awe. My stomach is fluttering. I have observed COURAGE in ACTION. As PILGRIM SALLY drifts between the translucent boundaries of land, marsh, and ocean, as she puts on THE WINGS and flies like a raucous wild bird along on her next JOURNEY, I declare my LOVE and AFFECTION for her.  I applaud her TRANSFORMATION. She has said “YES” to what is ahead of her. Yes, ALL WILL BE WELL. 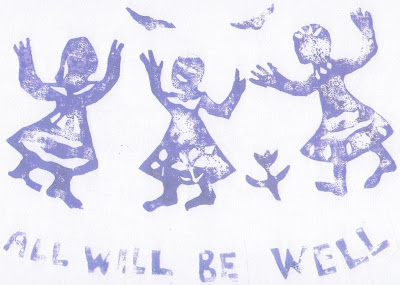 Labels: all will be well, art as medicine, hallelujah, journey, pilgrimage, wings