CREATIVE CHAOS CLAMORING AT THE GT LANGUAGE INSTITUTE: STUDENTS RE-INVENTING THE TEACHER AND THEMSELVES 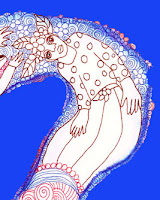 What occurred in the Spring Session 2, 2011, CREATIVE writing class in the O’Keefe Building of the Language Institute at Georgia Tech? Halleujah confronted a MIGHTY INTENSE CHALLENGE to her belief in the POWER of CREATIVITY. Let me express it in a three-line form I teach my CREATIVE writing students to make abstractions more concrete (The first line presents an abstract word placed in a setting. The second line clothes the abstraction. The third line summarizes the action.):
Chaos clamors at the GT Language Institute in room 218,
Wardrobed in the form of CREATIVE WRITING STUDENTS,
Refusing to logoff Facebook and unplug their headphones in rebellion against their own imaginations! 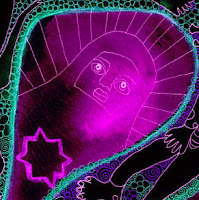 Why CHAOS and REBELLION? What had gone wrong? I had optimistically walked into this CREATIVE writing class expecting to have FUN…and teach English! Instead, I confronted a most unusual configuration of gender, nationalities, and ambitions. Immediately, this class informed me of a goal that unified them all—they needed to be enrolled in Language Institute classes in order to maintain their Visa status while waiting to be admitted to US graduate and undergraduate programs. Rumor had it that my CREATIVE writing class was easy and would allow them computer access to apply to schools, fax important papers, answer emails, and surf the Internet! 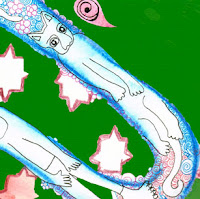 Not every student was indifferent to exercising his/her imaginative mind, but overall the class “personality” was that of defiant vocal GIANTS. As I laid treasures of creative writing exercises at their feet, they recoiled into national conclaves speaking a shared language unknown to me. Natalie Goldberg—guru of process writing (losing control, going for the jugular, stopping the internal censor)—was knocked off the pedestal I had placed her on. Striving to evoke their five senses, I burned scented candles, used artistic visual images and, played international music. These students complained loudly of my tastes. The candle smelled bad. Why Indian and Mexican line drawings? How did I find this music? These criticisms were followed by an edgy mocking laughter, making me wonder how was I going to lead these students down the avenue to their own CREATIVITIES.
Confounded by their responses, I had to acknowledge I was experiencing a kind of culture shock in part because of the class demographics. I was accustomed to “confetti” classes comprised of 50 percent or more Asians, a smattering of South Americans, peppered by any one of 30 other possible nationalities. Usually, I had a pretty good balance between the genders with a healthy mix of religions and academic majors.
This particular class was oddly disproportionate. Of my fifteen students, ELEVEN were MALE. Most of them were ENGINEERS. Nine of them were MUSLIMS from Turkey, United Arab Emirates, and Saudi Arabia. Nothing is wrong with any one of these demographics. I adore experiencing cultural differences and subsequently broadening myself. However, the combination of these class characteristics resulted in a strong—albeit good-natured— “machismo” oozing into every corner of our computer lab. My “teaching voice” suddenly diminished. It seemed neither loud nor authoritative enough.

Every day, I found myself entering their classroom, using the loudest most booming voice I could summon without shouting. My bravado wilted over defiant foreheads already leaning into computers blazoning with Facebook feeds. Many couldn’t hear me because of ears securely masked with headphones. These students didn’t need to perform or pass my class; they only needed to warm their seats and get their attendance recorded.
War must be waged in the name of CREATIVITY, I told myself in the beginning. My initial strategy was to drag them away from the wall of computers to chairs forming a conversation circle. Sitting next to each other, I had them write in journals by hand. Suddenly, they seemed vulnerable without their computers shielding their bodies and faces. I had also torn them away from their language “neighborhoods,” asking them to sit next to students with different languages. 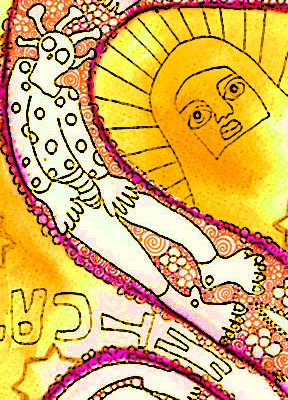 Still this social arrangement of being visible to one another without electronic devices (iphones, ipods, or headphones plugged into computers) failed to inspire IMAGINATIVE THINKING or the SHARING of IDEAS. Everyone was miserable, including me! In addition to drooping because of a lack of inspiration, students informed me that I was preventing them from developing the word processing skills they so desperately needed to succeed in graduate school. They thought we had retreated to the DARK AGES by using handwriting!
I BELIEVE CREATIVITY MATTERS.
I BELIEVE IN THE POWER OF CREATIVITY TO TRANSFORM.
I BELIEVE CREATIVITY RESTORES A TIRED MIND.
I BELIEVE CREATIVITY CAN WAKE US UP.
I BELIEVE CREATIVITY MOVES US FORWARD.
HALLELUJAH! These sentences are my mantras. I repeat them often to myself and to my brilliant paleontologist husband Chiboogamoo. I BELIEVE CREATIVITY MATTERS. Clearly these students were going to advance my BELIEFS in the importance of CREATIVIVITY! “But how?,” I asked my scientist husband who could sympathize with my engineering students. What could I do to engage these disengaged students who thought my exercises were worthless? After several discussions with Chiboogamoo, I decided to focus my writing lessons even more on the experiential world. All good writing begins with the ability to record and interpret the five senses. I would re-emphasize the sensorial world with my ENGINEERS!
While I still have a long way to go in developing a CREATIVE writing class specifically for ENGINEERS, I used two different kinds of exercises successfully. Every writing teacher knows that it is essential for students to employ the five senses: sight, taste, touch, hearing, and smell. So for the first experiential exercise, I had my students go outside the Language Institute to observe and record what their senses took in. After the students recovered from their excitement of being “freed” from the confining classroom, they succeeded in surprising themselves.
Some of them had never sat down in Atlanta and just experienced BEING PRESENT to the sensations surrounding them. They became challenged. What was the English word to describe the cloud formations? What was the word for the sound of the wind? What were different words for the color blue? Observation and reporting collided with language learning!
In addition to using their observation skills, I asked them to be curious, to ask questions, and to reflect on what they were experiencing. Upon returning to the classroom, the writing assignment was simple. Blog your observations, questions, and reflections. They LOVED this assignment. Before class ended, the blog entries were posted (See example entries from Wounded Mind and Purple Surfboard). For one of the final class assignments, I asked the students to repeat the observation exercise, but this time to write Haikus, a simple three-lined poem consisting of 17 syllables (See Haikus from A Hopeful Emiratee, and Alexander Ottoman).
The second experiential assignment, which was also successful, was engaging my students in the MARSHMALLOW CHALLENGE (Tom Wujec, a fellow at Autodesk—a world leader in 2D and 3D technology, designed the Marshmallow Challenge to support his passion in inventive thinking and team collaboration.) In this exercise, the class is divided into small groups. Each group is given 20 pieces of dry spaghetti, a yard of masking tape, and a yard of string. They are challenged to build the tallest standing structure with the marshmallow at the very top in 18 minutes! My ENGINEERS were DELGIHTED by this exercise! This exercise woke them up and made them think CREATIVELY as they competed against each other and a limited amount of time. 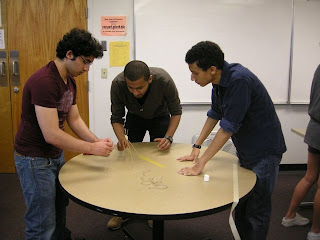 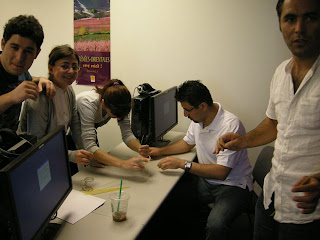 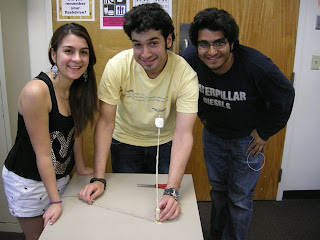 At the end of 18 minutes when a winner was declared, I asked the students to write a “report” of the event, describing the goal, process, and outcome. 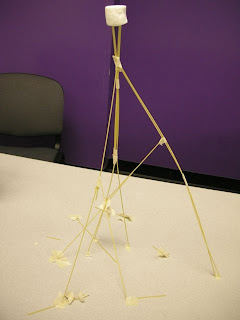 Then, I asked them to expand their understanding (CREATIVITY) by thinking of what they learned from the MARSHMALLOW CHALLENGE and how they could apply it in their future careers. Here is what An Unknown Researcher concluded:
The purpose of the exercise was to see how we will react and build the structure. Personally I think that this exercise was also meant to stimulate our minds into thinking on how to achieve any objects. The thing that surprised me that most was how brittle the spaghetti stick was. I learned that I am not very patient when working with my teammates.
I think that the marshmallow test can somehow relate the way we try to reach our goals in life and how to support it. Only those with a clear vision can make a structure just like in life only those who dream can make it. This experience can help me to plan my life and I shall use it in the workplace.
(See other responses from The Claymore and Hazel-Eyed Horse).
MY CONCLUSIONS AT THE END OF THE SPRING SESSION?
Hallelujah for WAKING UP this class! What is CREATIVE writing? Especially when occurring in a language you are acquiring for academic purposes? At the beginning of this class, these mature successful students had clear ideas about directing their learning. And, at first, I had equally clear ideas about how to direct their CREATIVITY. During our eight weeks together, we all made compromises in our established values and surprised ourselves by leaving the familiar and STRETCHING into the UNKNOWN.
At the end of the class, I experienced a few successes—at least ones I know about. One Turkish student, who has been accepted to work on a doctorate at Vanderbilt University in Nashville, Tennessee, thanked me for helping him become comfortable expressing his ideas in English. He had achieved one of my goals for this course! Read the subtitle to his blog, Alexander Ottoman: "Plunging into the deep ocean, drinking waters coming from all continents and cultures, combining east and west in one civilization or city-Istanbul."
Another student, one from Saudi Arabia, was disappointed when he learned I wouldn’t be teaching the class again this summer and that he couldn’t repeat it, at least with me. He told me he wanted to exert more effort this time! 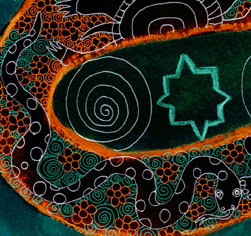 And what did I learn? CREATIVITY still MATTERS. But CREATIVITY begins in different places for different people. It takes CREATIVITY to discover the where’s, how’s, and what’s for each class. I am a BETTER TEACHER for having taught this group of students. They were my TEACHERS on my CREATIVE JOURNEY! 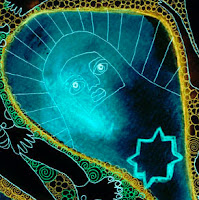 Visit other blogs I’ve written about teaching Creative Writing a the Georgia Tech Language Institute:
The Creative Pilgrimage: Journey Matters More Than Destination (January 20, 2011)
Couraging: Speaking Heart (January 30, 2011)
I Never Thought the Burka Would Seduce Me: Understanding and Creating Metaphor
(February 8, 2011)
This I Believe: Creativity Transforms (February 20, 2011)
Hallelujah for other GROWING! Hallelujah for the PILGRIMS we meet along the way! Hallelujah for the ALCHEMY of FIRE! SOUL BLOG with Hallelujah and tell me about your experiences with CREATIVITY!