HALLELUJAH for holidays spent doing ichnology along the Georgia coast and for Paleontologist Barbie, who loves talking about science and just how much fun it is. This interview took place with Paleontologist Barbie in 2011 following her Thanksgiving bike ichnology trip to Jekyll Island, Georgia, USA.
HALLELUJAH TRUTH: What is bike ichnology?
PALEONTOLOGIST BARBIE: It’s my favorite type of ichnology to do whenever I visit Jekyll Island. You can either ride a bike, or like I did ride in the back of a bike and scan the beach for traces as you zoom along the shoreline. It’s kind of like “fast forward” ichnology, looking for traces rapidly instead of viewing them just one step at a time.
HALLELUJAH TRUTH: Why don’t you just relax on a holiday like Thanksgiving?
PALEONTOLOGIST BARBIE: I like to think that Thanksgiving is a time to give thanks for many good things in our lives and one of them is the awesome power of science. There is always plenty of time later for turkey, stuffing and mashed potatoes. I want to get out there and give thanks for all that nature has to teach us.

HALLELUJAH TRUTH: Do you do anything traditional for this beloved American holiday?
PALEONTOLOGIST BARBIE: Of course I do, but as you have noticed I’m different from a lot of people, so my getting out and taking in the sites, sounds, and smells of Jekyll Island also means a lot to me.
HALLELUJAH TRUTH: Why do you choose Jekyll Island for bike ichnology?
PALEONTOLOGIST BARBIE: Lots of people on Jekyll Island get around by bicycle. So when on Jekyll, do as the Jekyllians do (giggle)! But what is also nice about biking on Jekyll Island is that it is flat, has lots of bike paths, and long beaches that you can ride down, some times with the wind at your back and your hair flowing in the breeze. A girl couldn’t ask for more than a beach experience with crustaceans, molluscans, horseshoe crabs, and shore birds!
HALLELUJAH TRUTH: What fascinated you on this particular bike ichnology outing?
PALEONTOLOGIST BARBIE: Well, first we (my colleague Chiboogamoo and you, Hallelujah Truth—can I call you Halla?) noticed that were many whelks buried along the beach because of certain patterns in the sand that became distinctive before our very eyes! We hadn’t seen such vast numbers of this Georgian gastropod clustered together before. Like private detectives, we began to observe the beach closely to see what clues we could find to piece together the whelks’ story. These whelks, varying in age from very young ones to very old ones, had buried themselves to avoid drying out during a low tide. Their burying activity had loosened the sand surrounding them. What we found fascinating was was that along with this clustering of generations of whelks were a lot of little clams, which had buried themselves around the whelks in the softened sand. This concentration of whelks and clams then attracted shorebirds. And the shorebirds left a dizzying array of tracks and beak pecks circling around the whelks and clams. It was like one thing lead to another—ecologically speaking. What a story!
HALLELUJAH TRUTH: Talk to me about how your perception is changed when you are riding in a bike pannier.
PALEONTOLOGIST BARBIE: I feel like I am in a super fast motion, scanning right-left, then left-right looking for anything that sticks out on the flat beach. It is amazing how quickly you can spot something far away when there is nothing else in the way and when you are moving really fast (squeal)!  Do you know what I am talking about (Paleontologist Barbie can barely conceal her enthusiasm.)!
HALLELUJAH TRUTH: How did the ichnology change as you went from the beach to the salt marsh?
PALEONTOLOGIST BARBIE: Well the animals, of course, are totally different. Beaches have whelks, clams, shorebirds, and ghost crabs all living there and leaving their traces. The marsh has oysters, mussels, fiddler crabs, and no shorebirds. Also the beach is sandy and the marsh is muddy—duh! Therefore, the traces are really, really different!
HALLELUJAH TRUTH: Anything to say about the fiddler crab or the speckled crab?
PALEONTOLOGIST BARBIE: I think fiddler crabs are hilarious, especially the males, who stand in front of their burrows and wave their big claws to attract mates. It reminds me of a lot of social situations I’ve been in, if you know what I mean! But these fiddler crabs are also great burrowers. So I like studying their burrows to see how these might get preserved in the fossil record.
Now, speckled crabs don’t live in the marsh but in the shallow marine environments just offshore. Once in a while you are lucky enough to see one in the surf zone on the beach. They will leave tracks and then scoot into the sand so that they blend in. I envy them because I never blend in (giggle).
HALLELUJAH TRUTH: Do you eat whelk or any of these critters that you track?
PALEONTOLOGIST BARBIE: No, I don’t. I’ve heard that people who live on Sapelo Island use whelks in their diets. Of course, there is a lot of seafood out in the marshes and off the beaches. But it doesn’t seem fair for me to use my scientific knowledge to hunt down my study subjects and eat them. I love them too much.


HALLELUJAH TRUTH: Explain to me why the ichnologist in you gets mesmerized by old wood that drifts up on the beach.
PALEONTOLOGIST BARBIE: Fossil wood that drifts out to sea can get buried offshore and become part of the fossil record. I’ve seen fossil driftwood from the Cretaceous period that shows the same kinds of borings that you see being made by clams today in driftwood. Also, living barnacles and oysters attach to wood while it’s floating. Those animals also can get preserved with the wood in the fossil record too. Examining this driftwood is a way to know how a former tree contributed to the lives of animals that live in the sea. You can also say something about the behavior of those animals from the traces they left on the wood. We ichnologists love to tell stories! TRACE PATTERN RECOGNITION. A piece of driftwood catches Paleontologist Barbie’s attention, as she realizes this is an excellent model for recognizing fossil driftwood in the geologic  record. “Hey, check out those crustacean epibionts, and traces of molluscan endobenthos!” she says. She is talking about the small barnacles that attached to the surface of the driftwood and the wood-boring clams that drilled into the wood. (photo and caption by Chiboogamoo, aka Anthony Martin)
HALLELUJAH TRUTH: I know that you talked to a pre-teen girl about a sand dollar trace. How did that feel to be out educating the young on the Georgia beaches?
PALEONTOLOGIST BARBIE: That was a fun and fulfilling experience. We ran into a family walking down the beach on Jekyll Island, and they noticed us looking and photographing the trace made by a buried sand dollar. What was exciting is that this little girl asked what we were looking at, and she was really curious! Of course, I always try to encourage curiosity. So we told her under that raised bump that had five key-hole looking slots was a living sand dollar. We had her scoop her hands under the bump, and—oh boy--was she surprised to see what we had predicted was true! She was holding a purple-brown kind of fuzzy sand dollar with wiggling spines. A smile stretched across her face. Her parents witnessed their daughter’s engagement with part of Georgia’s wildlife!
HALLELUJAH TRUTH: Do you have any ideas about how to do more scientific educational outreach, so that children of Georgia and their parents can get better informed about this rich natural resource that runs along their coast?
PALEONTOLOGIST BARBIE: Well Halla, don’t you think you are contributing to scientific outreach about the Georgia coast by doing this interview for your blog? That’s what we need, more people like you who are sharing the exciting sites, sounds, smells, and knowledge you can get from the Georgia coast. I wish I could do speaking engagements too, but people always want me to speak behind a podium and I’d rather be out in the field where people can experience nature with me first hand.
HALLELUJAH TRUTH: After the bike is ridden, Thanksgiving dinner, eaten, and beach ichnology completed, how do you feel when traveling away from Jekyll Island with the bikes on the back of the car?
PALEONTOLOGIST BARBIE: Slightly exhausted but happy because I’m really satisfied with how much I learned and how what I learned is going to be passed on to other people. To me that bike ichnology ride along Jekyll Island’s beach is more memorable than any Thanksgiving dinner because my ichnological stories and photos will keep on giving long after the turkey sandwiches are eaten and the wish bone broken.
HALLELUJAH TRUTH: Any future bike ichnology trips planned?
PALEONTOLOGIST BARBIE: None right now, but I can’t wait to get back to Jekyll Island on a bike to see what new traces will be there. You know nature is always changing, so I know we will see something different next time.
HALLELUJAH TRUTH: Give some advice to those who are interested in becoming bike ichnologists.
PALEONTOLOGIST BARBIE: First of all, safety, safety, safety. You should never do bike ichnology on a city street, for instance. On the other hand, long flat beaches where you might occasionally scare a seagull, are perfect for both beginner and expert alike. You can ride along and enjoy the breeze, or in my case, the wind blowing through my hair or whatever else catches your attention. Hurray for bike ichnology! Everyone should try it! 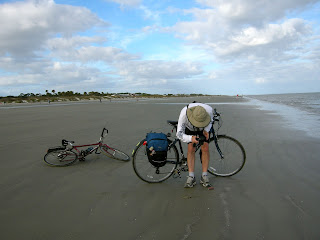