ENDINGS and AWAKENINGS: Coffee with Hallelujah considering the mystery

As I approach my 57th birthday this coming September, I have been experiencing the “ending” of an era and the “awakening” of a new one. What a mysterious process! 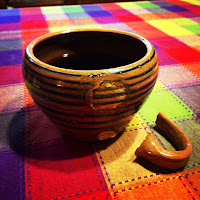 The breaking of this clay cup triggered today’s acknowledgement of CHANGE! I purchased this substantial brown-and-blue striped vessel 25 years ago at the family-owned Miller Pottery nestled down the road from the city of Brent, Alabama. It was 1990, and I was the manager of The Village Arbors, a plant nursery in Auburn, Alabama, which grew over 100 herbs and perennials. The two female owners and the rest of us took pride in finding unique pottery for our nursery gift store where we served herbal tea and freshly baked bread with herbed butters to our customers. So I had traveled a distance to visit and purchase clay pots from the Miller family, whose pottery had weight and heft to it due to the Alabama clay that was mined and purified right there on their premises (read about this family of clay artisans here). I succeeded in returning with treasures, some of which became mine.

By 2015, many of the pots I had purchased for myself from the Millers have long since broken.  And now this brown-and-blue striped coffee cup which held pens, markers, and pencils for me during my two decades of ESL teaching at Georgia Tech has rendered itself unusable.

Before today, I could tell that the handle was gradually pulling away from the cup. Perhaps, I should have squeezed glue into the crevices that were emerging where a potter’s finger had smoothed the handle into the cup’s body. Surely that attention would have prevented its demise this morning when the cup took an audible sigh, heaved itself away from the handle clasped in my hand, and just laid back down on the kitchen counter, splashing some coffee over its side.

This separation of handle from cup symbolized an ENDING for me. Since clearing out my office almost two years ago, I have used this cup—really bowl—for my morning coffee. And over the days and months, this clay vessel has begun to represent a myriad of things to me:

Return to another time (pre-ESL teacher)
In the late 80’s, I was turning 30. I wasn’t married and didn’t have a clear idea of what my vocation was going to be. I had dropped out of my second graduate school program. Even though I was a successful graduate student in both English Literature and Journalism with a proclivity for writing and an adoration of ideas, I wasn’t happy in my endeavors. Jumping from job to job, I possessed a life that was interesting and stimulating but quite chaotic. I continuously met new people and kept acquiring skills that enhanced and broadened my worldview.

Once I graduated successfully from my third graduate program and began the treadmill of teaching ESL day-in-and-day-out and year-after-year, I developed a hard focus on getting my classes prepared and taught and papers graded and returned. My colleagues were respected friends, and I adored the ever-changing flow of international students who came through my classroom. Yet somehow I failed to go deeper and wider in my profession, to keep growing. It was time in 2013 to leave to cultivate the self and develop new skills.

But who was I after twenty years? This brown-and-blue striped cup held some memories of that thirty-year-old for me. Such mysteries in this revery of endings and awakenings.

Time for morning reflection
In my mornings of drawing daily, this cup has sat beside me, stalwart and obliging. It is going nowhere and loves to supervise my artistry. I have time to sip coffee and draw. It has relished its role in the life of "Coffee with Hallelujah." What a mystery!

One cup of coffee is enough
Learning to live and make choices from a place of relaxation—and not stress—has been one of my goals since I left my teaching job. I reduced my coffee drinking from one pot a day to one cup a day….yes one BIG cup! Often, I don’t drink all of it, but this wonderful cup loyally guards the remaining coffee, positioned by the kitchen sink until dinner time should I want a sip or two.

Trust in finding what task/employment is next
What a wonderful adventure I had in those years of the great UNKNOWN. I worked for Jeannette and Betty at the Village Arbors for three growing seasons! During that time, I also started my own business teaching English to internationals in an office I rented over a realtor’s office next to the train tracks. I made regular trips out to Sandhill, Alabama, to Buddha Heart Village to edit a book on Buddhism by Dr. James Yhu, an engineering professor at Auburn University and someone I was studying with. Oh! I had the most wonderful friends!

During that time, I struggled to discover what was next in my life. I almost giggle now as I reflect on these years! LIFE was right there happening to me the entire time! LIFE happens every moment! Even now as I work and play to transition to the next stage in my life, I am reminded to TRUST in what is NOW. NOW is next….what a mystery!
….Thus leading to the AWAKENING. Something is over (the cup that runneth over has broken). Something has begun (the child has been born). This image of a newborn baby appeared to me in May. Did she appear because of my performance work with “Embody the Mother”? Or because I was drawing and painting daily? Did she appear because I was dancing every morning and teaching InterPlay Alchemy? Or as a result of this discussion or that discussion? A walk? An embrace? What a mystery! 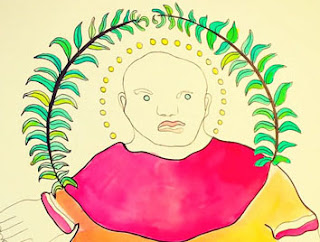 YES! YES TO ALL of the above! YES! Yes to life! Yes to endings and awakenings! And all that they hold. I am considering repairing the cup….but am also ready to move broken things out of my life and see what may appear next. As Cynthia Winton-Henry says, "more shall be revealed."

That’s Coffee with Hallelujah! What ENDINGS and AWAKENINGS have you experienced recently?