GOING DOWN TO THE RIVER: A RITE OF PASSAGE 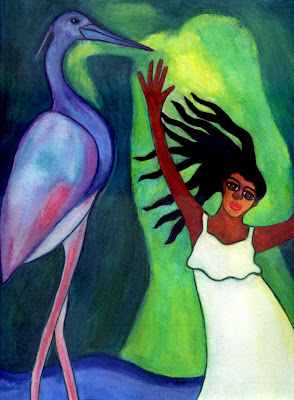 Hallelujah for celebration of change! Hallelujah for the RIVER of LIFE. Hallelujah for state parks that allows PILGRIMS to dip into the flowing healing waters and in the darkness of deep-green protective pine trees. My Chiboogamoo and I recently went to Sweetwater Creek State Park in Douglasville, Georgia, for the renewal of our SPIRITS, to track the presence of wildlife, and to “discover” whatever was awaiting us.

In addition to the various little toads jumping jubilantly across our trails, deer tracks appearing and disappearing in the sandy black soil, and a single blue heron feeding from the rocks on the river bank opposite us, we came upon FELLOW PILGRIMS participating in an ANCIENT SPIRITUAL RITE. 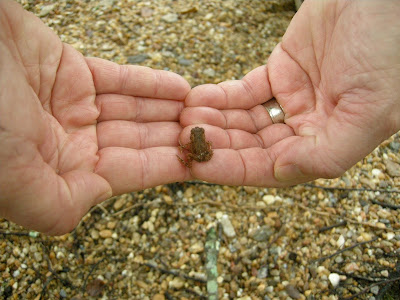 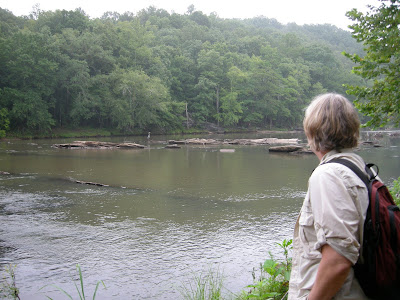 (On an early Sunday at Sweetwater Creek, my Chiboogamoo captured me revering a blue heron.)


At first, I asked my Chiboogamoo if those were some white birds flocking along the river’s edge far ahead of us on the riverbank. We were scaling rocks, hugging the earth, and looking out into the mist. Blue heavy air veiled the trees and river, and in front of us, we could see “movement”—something TRACKERS are always looking for in the hopes of seeing the TRACEMAKER, be it deer, raccoon, turtle, or opossum. Earlier, we had seen a flock of ducks fly by along the river’s path.

We paused. HUMANS dressed in WHITE formed a circle. We froze. SOME IMPORTANT ACT was occurring. We did not want to interrupt them.  Then HUMANS sensing HUMANS, the ENACTERS of this RITE turned and looked at us. We moved into action, scurrying up the hillside. We slid here and there. The pine straw, a foot deep, was slippery, and underneath the pine needles, the earth was muddy because it had been raining. I encountered a wonderfully plump millipede in the process!

Out of breath after our brief WITNESSING of this “going to the river” RITE, we asked each other what it was about. Was it a BAPTISM? Then a few days later, we went to see the play, “Shakin the Mess of Outta Misery,” written by the African-American playwright, Shay Youngblood.  Set in a community of 8 “Big Mamas” who are playing mother to a teenage girl—“Daughter,” whose mother has died, the play is about them preparing the teen for her passage into womanhood by TAKING her DOWN to the RIVER. The possibilities at the river’s edge are many for us PILGRIMS.

One thing I know for certain is that WATER HEALS. WATER TRANSFORMS. NATURE HOLDS and ENFOLDS US. What my Chiboogamoo and I saw has stayed with me. I feel LARGER somehow for having WITNESSED this RITE by the RIVER. The watercolor images you see here are my response to yet another wondrous MYSTERY in my JOURNEY. I am grieving the loss of friends. The RIVER promises the possibilities of healing. The RIVER promises continuity of movement. The RIVER flows, and so must we my fellow PILGRIMS…in our own time…. 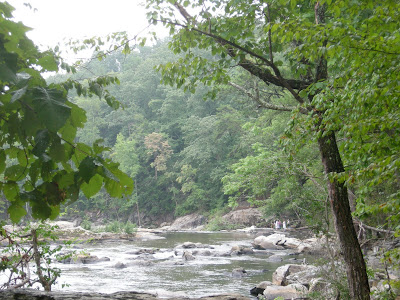 (Chiboogamoo and I were startled by the presence of a group of Pilgrims performing some rite of passage at the river side. Please forgive Hallelujah for photographing this private moment. I wanted to hold it for longer than a moment.)


Hallelujah for PASSAGE. Hallelujah for NATURE. Hallelujah for RITUALS that assist us in moving along the RIVER of LIFE. Soul Blog with Hallelujah and tell her about PASSAGES in your life. Do you have any words of praise for the healing powers of NATURE? Share your ideas with HALLELUJAH! Blessing to all of you FELLOW PILGRIMS. 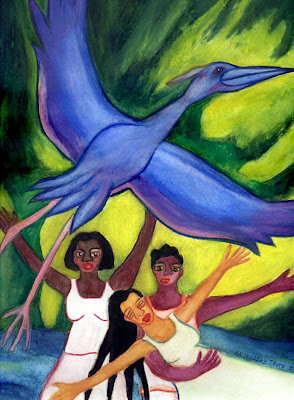