VISITING THE BLUE MOSQUE: A moment of transcendent light!


Hallelujah for the Blue Mosque! Hallelujah for seizing the day and traveling to Turkey to one of the most magnificent cities in the world—Istanbul!
To step into the dazzling light streaming through windows in the Blue Mosque in the ancient part of Istanbul was the fulfillment of a dream of mine that begin in my ESL classroom almost twenty years ago.  Turkish students inevitably write papers or give presentations about this architectural holy wonder that was built by architect Mehmet Aga to compete with the awesome Aya Sofya located close by. 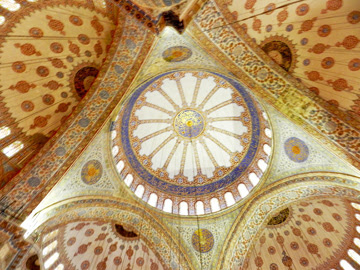 Better yet, although the Blue Mosque is open and free to visiting tourists, it is still an active place where Muslims pray five times a day. One of the most thrilling aural experiences is hearing the call to prayer, which is played on microphones and projected out over the entire city. At this time of prayer, tourists are escorted out hurriedly, and the courtesy scarves and wrap around skirts lent to women to politely cover themselves are collected.
The crowd’s hustle and bustle combined with its genuine respect for this sacred space is overwhelming! I am reminded of how much the spirit of creativity and the sophisticated execution of human imagination can elevate us to something transcendent.
This exquisite mosque was constructed a thousand years after the Aya Sofya between 1606 and 1616 and has 260 windows and thousands of blue tiles that give the Blue Mosque its name.

Being there was like experiencing an explosion of transcendent light!

Hallelujah for the Blue Mosque! Have you dear pilgrims visited this LIGHT HOUSE TO THE SPIRIT? Or a similar place (if one exists)? SOUL BLOG with me at Coffee with Hallelujah and tell me about it!

PALEONTOLOGIST BARBIE GOES TO THE NATURAL HISTORY MUSEUM IN LONDON: Revels in Dinosaur Hall and So Much More

One year ago, pre-2012 Olympic Games, Paleontologist Barbie visited the United Kingdom (U.K.) in May. Near the top of her list of places to see there was the Natural History Museum in London, with its many displays of fantastic fossils, and some of which have historical significance in the science of paleontology. The following interview is a result of just a small sample of what she saw and learned while there with Anthony Martin, Emory University’s paleontologist, and his wife (me) Hallelujah Truth.


HALLELUJAH TRUTH: Why is it that you wanted so desperately to get to England and especially to the Natural History Museum of London?

PALEONTOLOGIST BARBIE: Much of paleontology of today started right here in England with Mary Anning. Many of her great fossil discoveries are in the Natural History Museum of London, along with those of other paleontologists of her time in the 19th century. This was like visiting sacred ground!


HALLELUJAH TRUTH: Can you tell me something more about the history of British paleontology that interests you specifically?

PALEONTOLOGIST BARBIE: The United Kingdom is where the word "dinosaur" was invented. Richard Owen invented the word which literally means "terrible lizard." And because it was Victorian England, "terrible" at the time meant "awesome"! There were other notable paleontologists, too, such as Gideon Mantell who discovered Iguanadon, and his wife Mary, who discovered fossils with him and then illustrated many of them.

HALLELUJAH TRUTH: What did you think about the exhibits at the Natural History Museum of London?

PALEONTOLOGIST BARBIE: I really enjoyed that we could walk above some of the skeletons of the dinosaurs, and I was thrilled to see the original specimen of Baryonyx. This was the first dinosaur interpreted as a fish eater, although I'm not sure whether or not it just ate fish on Fridays (giggle). The robotic dinosaurs, I didn't like so much. I'm more of an old-fashioned paleontologist. Give me dinosaur bones. Give me dinosaur tracks. I want to study fossils, darn it to heck!
PALEONTOLOGIST BARBIE: Three words: MARINE REPTILES HALL! I was in awe when I looked down that hallway and saw that the walls were stacked with incredible marine fossils from the Mesozoic Era. My jaw dropped. My face froze in a permanent grin, and I felt like I couldn't move. It was incredible.

HALLELUJAH TRUTH: What was one of the most exciting things that you saw during your visit at the natural history museum?

PALEONTOLOGIST BARBIE: I was left speechless when I came upon the fossil of Archaeopteryx, the oldest known bird...(tee hee)...or some dinosaur. Whatever. I just love science!


HALLELUJAH TRUTH: If you could spend an unlimited about of time studying and asking questions in the Natural History Museum of London, what would you pick? Why?

PALEONTOLOGIST BARBIE: I would love to learn more about mammoths. So much of my background has been more in fossils from the Paleozoic and Mesozoic Eras, yet I'm living in the Cenozoic Era! And we live with elephants today, but what were elephants like ten thousand years ago? It would be really great to learn about those elephants and how similar to or different they were from from modern elephants. I also love returning to my roots--geology! And the U.K. is so important in the history of geology!

HALLELUJAH TRUTH: Have you done research in the U.K.? Why or why not?

PALEONTOLOGIST BARBIE:  No I haven't. But I think I would love to do it. Especially on the Isle of Wight. I have heard there are fantastic dinosaur tracks there and as you know, I love dinosaur tracks. Well! I just plain love any tracks, modern or ancient!

HALLELUJAH TRUTH: If you could work on any project you wanted to, what research you would like to do in the U.K.?

PALEONTOLOGIST BARBIE: Hmmm that is a good question! There is so much there to study, I would have a hard time narrowing it down. Great Britain has great trilobites and lots of other Paleozoic fossils. Marine reptiles from the Mesozoic. Dinosaurs. Fossil plants. I mean, Coal Measures: Hello!

HALLELUJAH TRUTH: Who is your favorite living paleontologist in the U.K. right now? Why?

PALEONTOLOGIST BARBIE: Dr. Angela Milner, who is at the Natural History Museum, because she was the co-discoverer of Baryonyx. But you know who else is really cool? Dr. Jenny Clack, she wrote a great book about the evolution of fish into four-limbed vertebrates, also known as tetrapods. Look I'm a tetrapod! (Paleo Barbie extends all four limbs and laughs).

HALLELUJAH TRUTH: What speaks to you artistically having been to the Natural History Museum of London?

PALEONTOLOGIST BARBIE: When I was there, they had a great exhibit on natural history art connected to Captain Cook's expedition to Australia. That was very interesting to see because it showed the important role artists played in the documentation of and exploration of plants, animals, geology, and other parts of natural history. Explorers didn't have cameras then, so they needed artists. And you know what? We still need artists!

HALLELUJAH TRUTH: And I would say scientists make excellent artists!

PALEONTOLOGIST BARBIE:  Why thank you (Paleo Barbie blushes, as she is also a practicing artist)!

HALLELUJAH TRUTH: Do you see any art projects coming from this visit?

PALEONTOLOGIST BARBIE: Hmmmm. I would like to do something to honor Mary Anning and Icthyosaurs. Remember the work that Robey Tapp did for Atlanta's Fernbank Museum of Natural History? Well I loved that, but I see myself going in another direction with how Mary Anning would reveal the ichthyosaur fossil piece by piece with each tap of her hammer on the outcrop. How did that really happen for her? Maybe her discovery should be done as a choreographed dance performance.

HALLELUJAH TRUTH: What other paleontological treasures did you enjoy while you were in the U.K.?

PALEONTOLOGIST BARBIE: Of course, it was thrilling to see both Darwin's home, Down House, and Crystal Palace while I was in London. But I also enjoyed seeing fossils in some of the museums in Scotland. The National Museum of Scotland in Edinburgh had some great fossils on display, and then those fossils in the Hunterian Museum in Glasgow were fantastic!


HALLELUJAH TRUTH: I know that you are a wild child when it comes to having fun, in addition to fulfilling your paleontological interests. What else did you do in the U.K. for pleasure?

PALEONTOLOGIST BARBIE: I have to say the highlight of the day after visiting Darwin's home was to also stop by his pub. That's right! Darwin's bar still exists. So it was thrilling for me to sit down at the bar where Darwin had a beer, and think about natural selection while I naturally selected my beer. Of course, I should add that I always drink in moderation and that I took public transportation to and from Down House. It's very important to be responsible with your fun. I guess the 'wildness' you're talking about is my spirited enthusiasm for learning science!


HALLELUJAH TRUTH: Can you sum up what you learned from the Natural History Museum in one sentence?

PALEONTOLOGIST BARBIE: I would love to! Here goes: The earth has a history, life has a history, and our history connects with both of those! Wooooooo (she says laughing)!

ACKNOWLEDGMENTS: First and foremost, I want to acknowledge Paleontologist Barbie for her ongoing enthusiasm for all things paleontological! She is an absolute inspiration! Then I want to profusely thank Denise Drake for hosting us while we were in London. Her warm home, companion Ian, happy puppy, and good food fueling intense conversation supported our exploration of this vast urban U.K. city. London is fantastic! As always, without the persistent levity and intelligence of my Chiboogamoo, these Paleontologist Barbie interviews would not exist! I love and admire the creativity of this scientist, writer, and playmate that I live with!