THE PURSUIT OF THE WELL-BELOVED:THE FEMININE IDEAL 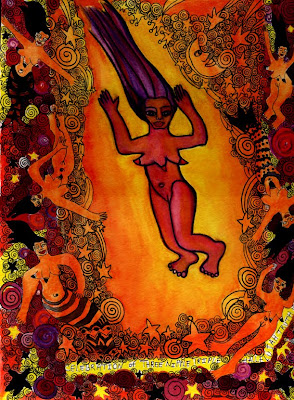 The Lure of the FEMININE—how I catch my breath when I see the beauty of her form and that form in movement. I have contemplated the mystery of the FEMININE for most of my life. Haven’t we all? What is it in FEMALENESS both her FORM and BEHAVIOR that is so utterly intriguing?

The FEMININE principle occurs everywhere and at all times. Yet depending on the PERCEIVER, the power of the FEMININE may shift and move. In one of Thomas Hardy’s novels, THE WELL-BELOVED (1897), this kernel of “abstact” femininity shifts constantly from one human woman to another to the chagrin of the main character, a man. Jocelyn Pierston, a sculptor, keeps glimpsing his FEMININE ideal as she appears and disappears in the real women he pursues for “artistic” reasons and through the succession of 3 generations of women he courts from the same family.

Imagine what happens to this Hardy character, this PILGRIM, on a journey to harness the FEMININE ideal! In a reverse Pygmalion fashion, the course of his life and character are carved out as he helplessly strives to capture “HER” not only in his sculptures but also in his domestic life. Decades are spent on his efforts to contain the EPHEMERAL of what is FEMININE. His life story does not end joyously, but like a faithful PILGRIM true to the yearnings of his heart—he pursues his IDEAL failure after failure. (Yes, I never finished my master’s thesis on this topic of “failed idealism” after completing my coursework for an MA in literature at Auburn University.)

In my own life, I too have sought the “obtainment” of the FEMININE ideal—though not as rigorously as Hardy’s sculptor. As a woman, I have fought at times to be a BEAUTY through my wardrobe and achievement of an admirable figure. As an artist, I have fallen absolutely in love with the FEMININE as SHE is expressed all around me in chatter and earnest expressions, flowing or clipped hair, hands holding pencils or dancing in the air, napes of necks, sloping noses and curves of breasts and hips, the selection of cowboy boots or platforms….The FEMININE expresses HERSELF in infinite and diverse imagery! For me, SHE exists in all sizes, shapes, ages, and ethnicities—and this diversity is mysterious and intriguing!

(These FEMININE images with the three breasts are experiments in discovering what form might best express a name of a beer called "Three Nipple Triple." ) 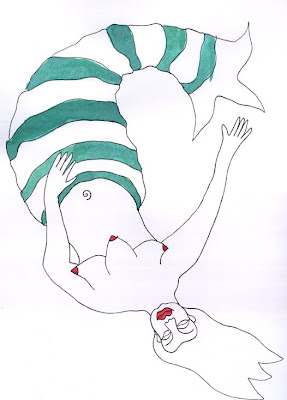 Right now, I am teaming up with the Beer Brew Girls to capture a “contemporary” form of the FEMININE. Let me explain. The Beer Brew Girls, a creative duo, started brewing beer at their home and are currently developing this enterprise into something larger and collective—possibly, a future micro-brewery pub in the Decatur area, making beers with names such as “Fallen Angel,” “Bongo,” “Three Nipple Triple,” and “Pumpkin.” Beers with names like these surprised and delighted me last April (2009) when I was invited to a Beer Brew Girls beer tasting party and drank a “Fallen Angel” and other well made beers. I immediately began envisioning the FEMININE images for their beer labels! And told them so--even though I had just met them!

Since then, I have been inviting the BEER BREW GIRLS’ FEMININE forms to emerge from my passionate enthusiasm onto my drawing table. The ephemeral FEMININE is tricky and hesitant to be enticed into the permancy of simple black lines. The BEER BREW GIRLS drawings I show in this blog are works in progress. Let’s see what the future holds as I continue collaborating with the BEER BREW GIRLS and their creative team. 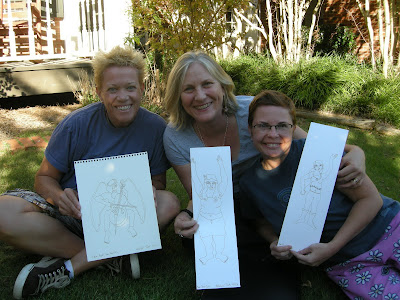 (Here I am, with the Beer Brew Girls. We are holding some of my Beer Brew Girl images. "Fallen Angel" is on my left. I'm holding an image I would like to see go on a stout or blonde ale with a high alcohol content. And the image on my right doesn't have a beer to go with it yet--any ideas? To find out more about the Beer Brew Girls read Scoutmob's article!)

Anyone wanting to taste the BEER BREW GIRLS beer or see my images of the FEMININE in person, there will be another beer tasting event on November 20th in Decatur. Artists will also be at the event, including me. Write Hallelujah for details!

Meanwhile, Hallelujah praises the FEMININE, the WELL-BELOVED and asks all of you PILGRIMS out there to HONOR HER right now with respect and love—a worthy pursuit! SHE resides right now in our mothers, sisters, friends, daughters, neighbors and colleagues! SHE is EVERYWHERE! Hallelujah!

(This image of "Lady Pants" is the first image I drew for the Beer Brew Girls. As you can see on the label, Kathe brewed the beer for a special occasion. Kimmie, a graphic designer, made the label.)