LIFE CYCLE of MOONSNAILS: LIONS of the TIDAL FLATS 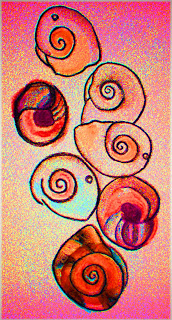 Dear PILGRIM! How fortunate I feel, how exuberantly thankful to witness the mesmerizing cycle of LIFE in the form of the MOONSNAIL along the Georgia coast in the middle of March!
My Chiboogamoo and I (along with my sister-in-law Liz) left Atlanta with the Japanese magnolias weeping pink petals on the ground waking from winter. Other trees stood by ready to exhale life into budding leaves and blooms. We headed to Jekyll and Sapelo, beautiful barrier islands along the coast of Georgia.  One of the most exciting aspects of visiting undeveloped coastal islands is that you never know what you will discover in the vastness of their overflowing LIFE.
To my surprise and delight the glorious carnivorous, and yes—cannibalistic—MOONSNAIL dominated the shore from surf to the dunes! How exciting to see
thousands of “sand collars”—the nickname for the MOONSNAIL egg case—thrust everywhere on the beach’s surface. These sand collars were still wet and sparkly at the shoreline, dry and dusted with a fine white sand above the sea. 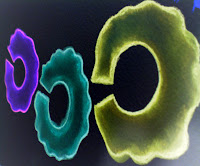 This funny grayish brown collar, smooth on the inside part of the circle and ruffled on its outside, is formed by a complex process. For anyone unfamiliar with snails, it must seem a bizarre one.
The snail’s foot comes out of the shell and completely engulfs itself. After the cilia on its foot collect numerous sand grains, the MOONSNAIL emits mucous and coats this sand layer before laying thousands of eggs onto it. Then the same process of collecting sand and emitting mucous is repeated to seal the eggs in. The MOONSNAIL then escapes this egg casing by digging downward, leaving the trace for us beachcombers to find! For the moonsnail eggs to make it to the next stage of life, they will need to hatch in the water and be planktonic until they form shells.
Because the sand collars were the largest and most apparent, we “discovered” them first. Yet rapidly scanning the beach, we then saw numerous MOONSNAILS at the water’s edge appearing to peak up from the sand as the receding tide was revealing them in their burrows.  It is in this stage of life that the MOONSNAIL is acting out its name—THE LION of the TIDAL FLATS—by feeding.
According to my Chiboogamoo (who has researched coastal ichnology for his forthcoming book, Life Traces of the Georgia Coast), the MOONSNAIL is the TOP PREDATOR of the sandflats. Unaware humans who might be fortunate enough to be strolling along these undeveloped beaches may or may not be aware that a terrific amount of predation is occurring underneath their feet. 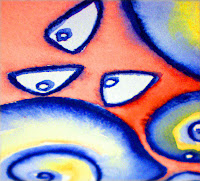 By inhaling and exhaling water through its mucous-coated foot, many LIONS of the TIDALS FLAT are hungrily pulling themselves toward their prey—anything slower and smaller than themselves such as the dwarf surf clam and even other MOONSNAILS! As it approaches its victim, the MOONSNAIL engulfs it in entirety with its mucousy foot. Then through a method that could have only evolved over millions of years, the MOONSNAIL follows an exacting procedure of steps. It emits a substance that weakens the shell of its imprisoned meal and then drills a hole in it with its secret weapon—teeth called a “radula,” which miraculously regenerates if damaged by the drilling. Finally, it inserts it foot into the little clam or snail and eats it—yes, before it has died! Yowl!
Often the casual stroller who leans down and scoops up the numerous shells with holes drilled neatly and precisely in them gives little thought to how they occurred! But I know, and now you do too—it is a result of the LION of the TIDAL FLAT—Neverita duplicata, commonly and affectionately called “moonsnail” because of its beautiful round shell—like the shape of the moon! My Chiboogamoo has wittily called the adornments made from the shells of these MOONSNAIL victims as “necklaces of death.” Thanks for that phrase, Baby!

Because of the vastness of these tidal flats on Sapelo and Jekyll, you must walk and walk to move from the surf zone where we found the live MOONSNAILS, which were actively burrowing and feeding to the dunes, to where we witnessed numerous abandoned MOONSNAIL shells crusted with sand, many displaying the now familiar MOONSNAIL drill hole. Cast among the emptied shells were MOONSNAIL eggcases that more than likely would dry out, break, and disintegrate without successfully contributing to the MOONSNAIL’s life-cycle. 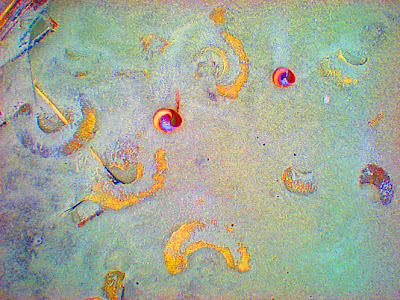 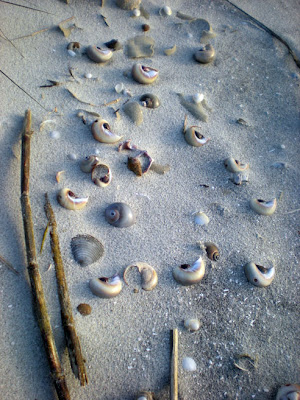 Hallelujah for the abundance of life even in a creature as small and obscure as the MOONSNAIL! Forever more elevated in my mind—and perhaps in yours too! Hallelujah to the LION of the TIDAL FLATS!
ACKNOWLEDGMENTS: With careful attention and wonder, we PILGRIMS can find meaning in unexpected places. Yet it often requires a wise guide. In my case, I thank my dear companion Chiboogamoo for all of his knowledge and patient teaching!
Another companion, Elizabeth Schowalter, was invaluable to me on this coastal venture because of her ability to see deeply into her surroundings and translate them into her own artistic vision (see her website: Liz Quilts: Kapa Kuiki Collection). I look forward to seeing future work of hers’ reflecting this trip. 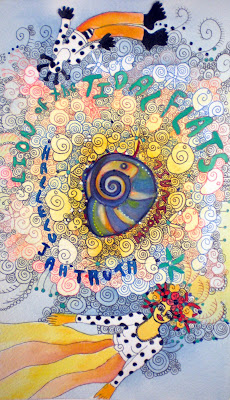 Finally, being HALLELUJAH allows me to be a gracious visitor filled with wonder appreciating all that my new environment bestows upon me.  It can be recorded that in the middle of March of 2011, on Sapelo island along the Georgia coast, the ocean, the tidal flats and dunes offered me this LION of the TIDAL FLATS roaring silently and unheard but observed.
Fellow PILGRIM, share your observations of the world around you by SOUL BLOGGING with me at Coffee with Hallelujah. 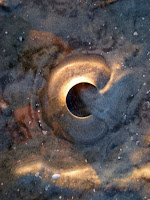 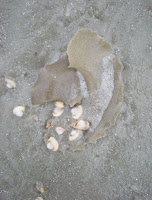 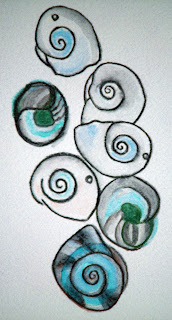