CHOOSE STARLIGHT OR STARDUST: WE CAN DREAM AND MANIFEST THE WORLD WE LIVE INh


We can choose to make our life STARLIGHT (magical authentic experience of the SOUL) or STARDUST (mundane existence, remnant of spirit). As clouds of patchouli incense surround me during my morning coffee, I am inspired to draw an important image of Hallelujah Truth. Reflecting on the movie, Stardust, that I saw last night (June 14) at the Plaza Theatre in Midtown Atlanta, Georgia, I choose to place Hallelujah Truth in the magic-full world of faeries (STARLIGHT), where a WALL divides her from the magic-less human domain (STARDUST).
Mythic Imagination sponsored the viewing and discussion of this 2007 movie, Stardust. And it was how the organization advertised the movie that made me feel compelled to see it (capitalization of significant words by me): 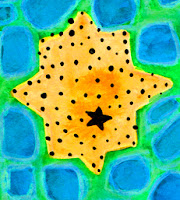 “Written by Neil Gaiman and directed by Matthew Vaughn, Stardust is the tale of a FALLEN STAR who crashes into an otherworldly kingdom and inflames a diverse crew of SEEKERS with a diverse group of desires, which they all think can be fulfilled by capturing her. They want the STAR for love, power, eternal youth, and riches-but what does the STAR want? Damaged by her fall, the STAR is in terrible danger.”
Dear PILGRIMS, I believe we are all STARS. And if we seek the light from others, it is only what we have lost from ourselves. The discussion after the movie with the president of Mythic Imagination and Lisa Stock, a film writer, actress, and producer of film in the mythic arts, had us all thinking about our psyches and dreamtime. Pirates, witches, kings and queens, and stars—characters in the Stardust—also make up our psyches. We are everything all at once. It is our JOURNEY to meet these characters in our own dreamtime and to learn more about ourselves.

When we are burned out from our daily human existence, it is our responsibility to renew ourselves, our SPIRITS, our STARLIGHT by listening to and investigating our DREAMS and celebrating and using our imaginations! We can manifest the world we live in. Hallelujah!
That’s Coffee with Hallelujah! Let me know about the VISIONS you have in your DREAMS and how you go about generating your STARLIGHT. Good-bye for now my dear STARS!
ANOTHER THOUGHT
Based on Neil Gaiman’s novel of the same name, Stardust was published initially as a graphic novel with extravagantly beautiful illustrations by American artist Charles Vess. If seeking inspiration, I suggest you explore Vess’s images on the Internet. I plan to buy the book!
A BIRTHDAY DEDICATION. This blog entry is dedicated to my mother, Bonney Schowalter, who is celebrating her 84 birthday this June 18, 2012! Happy birthday mother! I love you.
Posted by Ruth Schowalter at 6/16/2012