Regeneration: Collaboration of an Artist and Scientist

"Burrows acted as a midwife in the birth of Gaia."

“One of the functions of art is to give people the words to know their own experience… Storytelling is a tool for knowing who we are and what we want.”
-Ursula K. Le Guin

This story weaves together tales of a marriage between an artist and a scientist, who are both educators striving to use images and words to create and capture their experience and the story of a burrowing animal named Lystrosaurus, which survived a major extinction more than 250 million years ago by BURROWING.

Since my dear husband and I are without children, years ago we established a creative quest to deepen and enrich our marriage. We pledged to find concrete ways to co-create as a route to develop our skills of negotiation, to discover, and to give birth to something unique forged by our bond.

In the past, we have rented an artist's studio together and collaborated on art pieces for an exhibit at our local natural history museum (see this blog), we have cultivated a researcher's lifestyle for Paleontologist Barbie who travels to ichnological wonders of the world (see blog entires here), blogged about our field experience in Montana (here), and we've developed science communication workshops (see this blog and blog).

Recently, though, I have felt an urge to write about our micro-collaboration in his book, The Evolution Underground, which came out last year (2017) in February. We joined our forces together to make one image of Lystrosaurus.
But which came first in my experience to take action to visualize the Lystrosaurus story? My MARRIAGE (Tony and me)? HALLELUJAH (me)? Or the SCIENCE (Tony's ichnological knowledge)?

Me! This wisdom to place myself first in the vast realm of paleontological knowledge and alien terrain where my marriage takes me, was given to me in the early 2000's by a dear family friend, Melissa Walker, who told me to anchor myself, my "ME-ness" first. She advised me to find the value in our co-experiences that nurtured and sustained me. Thus fed, I could venture from a profoundly strong stance into my collaborative marriage and integrating scientific knowledge into my humanities background.

Therefore, Hallelujah to my Truth, to ME, First! It is now February 2018, and I have wanted to acknowledge the Hallelujah Truth image I made that preceded the image that Tony and I made (pictured above). Ta da! I am presenting "Regeneration" here (below). I am in the BURROW with Lystrosaurus. I placed myself there because I know about BURROWING. Don't you?

I drew on my BURROWING experiences to empathize with that of Lystrosaurus. Amazing to me that Tony could visualize animals surviving the worst mass extinction with such simplicity in a childlike mythic tale.
As a true collaborator in my marriage, I asked Tony to write something for this tale of our marriage and Lystrosaurus. This is what he offered:

"In a book about burrows, burrowing animals, and how burrowing animals have used burrows to survive catastrophes throughout earth history, I knew Lystrosaurus would have a starring role. Species of this stout-legged, dog-sized reptile, which lived about 250 million years ago (20 million years before the first dinosaurs) and survived the worst mass extinction in earth history. What probably helped them to survive a runaway greenhouse effect and ecological collapse? Burrows, which they dug and used as safe places in normal, everyday life, but which really came in handy when outside environments got more and more hostile to other animals. So I thought the best way to convey a sense of Lystrosaurus as a survivor – and one that survived because of its burrows – was by telling a fictional story centered on one female Lystrosaurus that underwent a Joseph Campbell-style “hero’s journey” during a time of mass extinction. I think it worked well for communicating many scientific ideas connected to Lystrosaurus as a survivor, but it also was a lot more fun to write. Ruth's idea of our creating a collaborative artwork, and one that expresses emotional and spiritual connections to this tale, somehow completed it." -Tony Martin 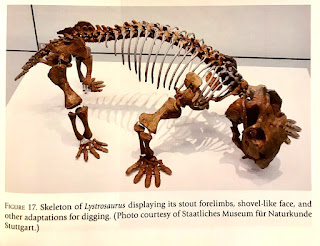 When I began this tale of my marriage and our Lystrosaurus collaboration, I imagined "stealing" lines from Tony's Lystrosaurus story, but I think I will save that story for another time or let you read about it in his book, The Evolution Underground.

Let it be said that not just anyone can make you cheer on a reptile from 250 million years ago as it climbs out of a BURROW to discover it might be alone, and that its species may have been annihilated. Since I am one who thinks in myth, responding to the world in metaphors, I was completely captivated by the Lystrosaurus's story of survival and found myself identifying with its journey.

Perhaps I'm coming out of another BURROWING experience in my life right now. It feels good to write my Coffee with Hallelujah blogposts again after a year of silence. I have returned to the surface after a year-long submersion in my BURROW. I continue to collaborate with my dear husband as we soon head off to Savannah, Georgia for the Southeastern Evolutionary Perspectives Conference. We will conduct two workshops together there!

That's Coffee With Hallelujah! Soul blog with me. Tell me about your BURROWING experience(s). Are you in or out of your BURROW? May I suggest that we create grace from the mundane to the mysterious as we move forward in 2018? 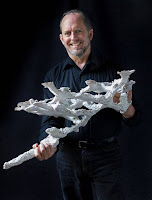 ACKNOWLEDGMENTS: Deep gratitude to my husband and collaborator. Tony Martin, author, paleontologist, ichnologist, and artist, here holding the cast of a burrow made by a marine invertebrate from the Georgia coast. He is a professor of practice at Emory University, where he has been teaching for 28 years. -photo by Lisa Alexander Streib Art
Posted by Ruth Schowalter at 2/04/2018