1st Anniversary of “COFFEE WITH HALLELUJAH”: Making Time for Creativity Each Day 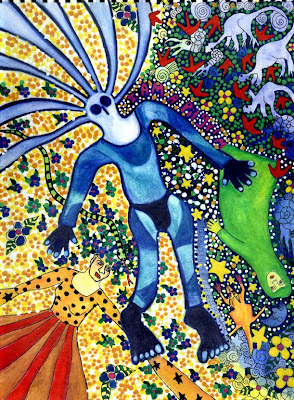 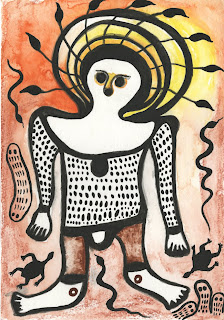 Out of CREATIVE GRACE, Hallelujah entered this world a little more than a year ago. She flowed from my imaginative womb singing YESes to each artistic possibility. Hallelujah has been celebrating my SOULFULNESS with the joyful ease of a cat napping, stretching every inch of my BODY into SPIRIT and IMAGE.

At this one-year anniversary, I am still HALLELUJAH-ing! This Hallelujah persona has not only informed me and been fun—but SHE has also S T R E T C H E D me. The principle of “Coffee with Hallelujah” is that if I have time for a cup of coffee each morning, I have time to DRINK in my SPIRIT as well. I have time for fifteen minutes of CREATIVITY.

Hence, the EVOLUTION of a SPIRIT—or TWO! Both the Aboriginal Creation God and I have evolved together in my daily drawings and paintings. Wandjina has captivated me since 2006 when I first went to Australia and spent hours in various museums around that vast continent. Last year in May 2009, after journeying to northwest Australia with my Chiboogamoo, I started yearning to draw Wandjina—to internalize his cyclone eyes, lightening rod hair, non-existing mouth, and whites, blacks, ochres, and siennas. 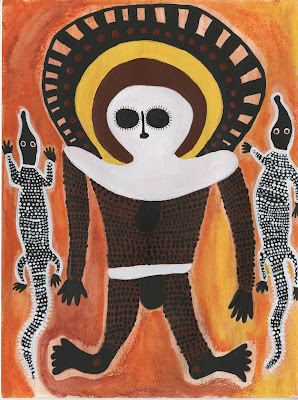 East of Broome and outside of Derby, I absorbed the work of the Mowanjum artists in their gallery and tourism center. Many of the Aboriginal artists are just now learning or re-learning the images from their Dreamtime stories that are painted in rock shelters throughout the Kimberley. The more than 200-year British occupation and subsequent Christianizing of many of the original inhabitants did create a temporary “memory” loss or gap for some Aboriginals. However, a 30-40,000 year old culture is not easily forgotten.

As the year progressed and I drew daily, Wandjina’s simultaneous earthiness and spirit informed Hallelujah. She began to wear a sienna and white skirt and a blouse with black or sienna and ochre spots. At times she sprouted lightening bolts for hair. HALLELUJAH developed a relationship with Wandjina and never journeyed without him. Wandjina began to represent THAT WHICH IS NOT HALLELUJAH—OTHERNESS! I petitioned a male DEITY-or-ENERGY to be my constant companion. 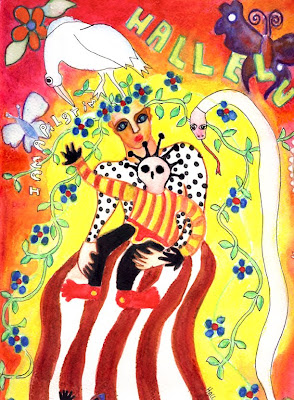 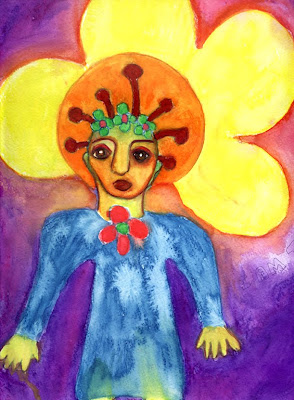 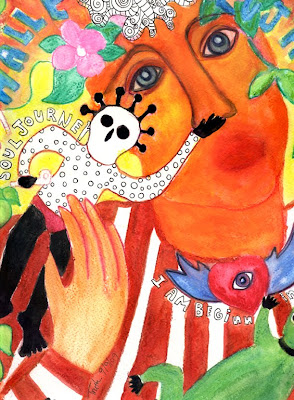 On my return to Australia this past summer in June 2010, I was able to study more aboriginal art. Imagine my surprise when I witnessed a contemporary Wandjina in the Australian Museum in Sydney! The artist had fashioned Wandjina in blues and greens, elongated his body, and had him emerging from blackness, staring at ME! I gasped! I was staring at the GREAT MYSTERY once again! Wandjina exuberant and athletic, catapulting out of the spirit world, witnessing ME! 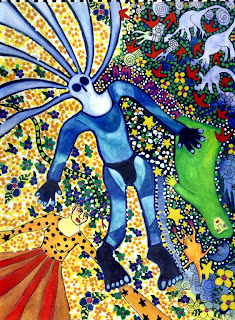 This image resulted: a bluegreen athletic Wandjina reeling in the universe with Hallelujah who looks like an action hero, no less and no more than Superwoman! Also  present here is a female figure shroud in green, MOTHER of the GREAT MYSTERY, another important figure that evolved from my daily drawings last year.

Hallelujah to the EVOLUTION of CREATIVITY! Happy Birthday HALLELUJAH!

FELLOW PILGRIMS, give yourself permission to CREATE. Observe your world. Seek what is TRUE to YOU. Find YOUR TRUTH. Discover that YOUR TRUTH IS OTHER PEOPLE’s TRUTH. There is a universality that connects us altogether. There is an ocean of US-ness, the collective unconscious.

Make time for coffee with YOUR HALLELUJAH!  For now, Hallelujah asks you to wish her Happy Birthday. Soul Blog with me. Support me in my journey and tell me how to support you in YOURS! Seeking FELLOW PILGRIMS….