PEOPLE SHOULDN'T DESTROY THEMSELVES: ONE STUDENT STANDING FOR WHAT SHE BELIEVES

Hallelujah for SOULS who care about our BODIES and how we tend to them! Hallelujah for FATEMA ALMAZROUEI!  For she took action towards reducing smoking and its impact—second smoke—in such a gently unique way at the end of the Spring Session 2 , 2012, at the Language Institute at Georgia Tech, I was compelled to interview her for my blog, COFFEE WITH HALLELUJAH.
I first became aware of Fatema’s anti-smoking campaign one day as I approached the O’Keefe Building, home of the GT Language Institute, and saw a trackway of footprints leading  smokers away from the front of the building to a smoking zone. Fatema had designated an area for smokers and nonsmokers. In doing so, she created boundaries for young internationals who were now talking openly about their rights to smoke or not smoke. And she gave a forum for those nonsmokers who wanted to discuss their rights not to be exposed to secondhand smoke.

Fatema also succeeded in creating an information rich environment about the hazards of smoking and secondhand smoke. Trees in front of the Language Institute had posters on them. As you approached the Language Institute, there were posters outside and inside. One wall had a blank sheet for everyone to write their opinions on. As  she waged this campaign against smoking with her fellow students, I grew fascinated with the woman who was doing this. Who was she? What made her take such specific action when many of us who feel rage at smokers never did one thing?


With a background in medicine, she took a variety of actions to inform students about the hazards of smoking both first hand and second hand. She agreed to be interviewed as finals were completed and students prepared for their summer holiday.

HALLELUJAH TRUTH: Who are you?


FATEMA ALMAZROUEI: Actually, because I have a background about the effects and consequences of smoking and how it affects smokers and nonsmokers, I decided to take action to reduce the smokers in front of the Language Institute here at Georgia Tech.

FATEMA ALMAZROUEI:  At first, I put out signs that asked smokers not to smoke on the Language Institute stairs near the entrance. These signs said, "Smoke free area. Thank you for your cooperation."  There was another sign that stated, "Please avoid smoking near the stairs and let us smell the fascinating scent of spring."

FATEMA ALMAZROUEI: Yeah,  they said, "Smoke free area," and they were used to define the smoke free area.
HALLELUJAH TRUTH: What were your fellow students' reactions to this initial effort?

FATEMA ALMAZROUEI: First, there were no reactions, but gradually the number of people smoking near the stairs was reduced. However, they were angry at my signs, and they were wondering where the places were that they could smoke.  So the next step was to decide the designated areas for smokers, where they could smoke.

HALLELUJAH TRUTH: Who decided that?

FATEMA ALMAZROUEI: I did. I was also consulting with one of the Language Institute teachers, Dana Clark, who supported my efforts.


HALLELUJAH TRUTH: So what happened next?

FATEMA ALMAZROUEI: Some of the smokers agreed to go to the designated smoking areas, but others didn’t.  Eventually, the signs I had posted were removed, but I don’t know by who. I put up new signs. At the same time, I had made  seven non-smoking signs that could be worn on people’s backs. These signs said: "2nd hand smoke! If U don’t care about Ur health, at least let me care about mine."  In addition to this sign for the back, I also created a no-smoking patch to be worn on the arm.

HALLELUJAH TRUTH: How did people respond to these signs that people wore?

FATEMA ALMAZROUEI: It made smokers ask questions. Such as "What is second hand smoke and its consequences?"  Also, it made them more aware that a lot of people were bothered by their smoking. 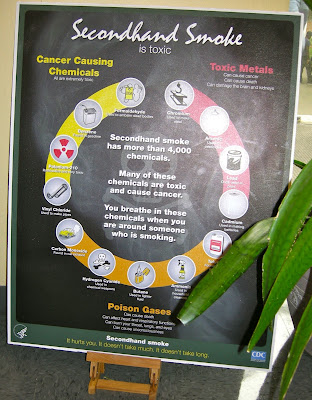 HALLELUJAH TRUTH: Who supported you other than Dana Clark?

FATEMA ALMAZROUEI: My friends. They told me it was great. You made the action we were thinking about, but we didn’t do anything.  Please give us signs and we will support you. We are impressed by your actions. Keep going. If you need anything, just tell us.


HALLELUJAH TRUTH: And I know that you took other actions. What were they?

FATEMA ALMAZROUEI: Yes I did. I made an informative poster about the negative impact of smoking for both smokers and nonsmokers. I also put up large poster paper so people could express their ideas about smoking.


HALLELUJAH TRUTH: What did you learn from what people wrote?

FATEMA ALMAZROUEI: That there are some people who were bothered by smoking and that others supported smoking. Their excuse was the buzz that they get from smoking.  Their reasons for continuing to smoke seem irresponsible considering the serious consequences. Some people told me they would consider quitting smoking for financial reasons but not for health reasons.

HALLELUJAH TRUTH: Tell me about the debate you held.
FATEMA ALMAZROUEI: The debate lasted about 30 minutes.  I invited all Arabs for this debate--3 prosmokers and 3 against smoking. About six other students made up the audience.  The smokers pondered their freedom to smoke and that they are not violating the law since they were smoking outside. They were wondering why smoking is legal. Nonsmokers also spoke of their freedom. If freedom is to harm others this should not be a freedom. They gave an example of stabbing someone else and asked if this is a freedom. I hope in the future that there will be a room provided for smokers, so they cannot harm others from their smoke. Also  to increase the awareness of people about the negative effects of smoking before they start smoking. 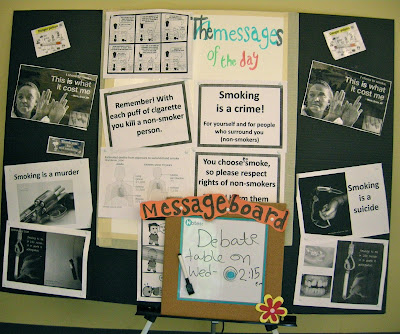 HALLELUJAH TRUTH: After having done this anti-smoking campaign here at the LI, what have you learned?

FATEMA ALMAZROUEI: I was glad that some people started to quit smoking.  I want to expand this campaign and to increase the awareness of people. Most people think that they can’t quit smoking because of the addiction. I can’t stand to see somebody destroy themselves in front of me. This is my nature. Some times I feel like I am mother.


HALLELUJAH TRUTH: Are you aiming to reach a certain group of people.


FATEMA ALMAZROUEI: I was wearing this sign every  where. And got support from a lot of people saying yeah….

HALLELUJAH TRUTH: Most people just complain. What made you take action?

FATEMA ALMAZROUEI: Because I was waiting for somebody to take action. I asked guys to talk to guys from my country, but the guys said that was like being a therapist, and they didn't want to do it. I decided to take action. Always in my family I try to encourage my brothers to talk with their friends. My brothers don’t smoke.


HALLELUJAH TRUTH: You had to spend money on supplies.
FATEMA ALMAZROUEI:  Yes, I spent my own money. I am person who doesn’t like others to destroy themselves by doing something useless.  I like to  encourage them to overcome their problems not by using these things.

THANK YOU FATEMA ALMAZROUEI! I appreciate your taking action to support your beliefs! You are one of my HEROES. I will think of you now when I see someone Language Institute students smoking and how perhaps they may benefit from a gentle discussion about the harms of smoking. I will miss you!