STORY TELLING THROUGH ART ABOUT LOSS AND REDUCTION OF INFORMATION: DANIEL BOYD AT THE BRITISH NATURAL HISTORY MUSEUM

Hallelujah for JOURNEY dear fellow PILGRIMS! Here in London, I have met Daniel Boyd, an Australian Aboriginal ARTIST, in the form of his work at the Natural History Museum.

As a Natural History Museum Artist in Residence (2012), he has created a new body of work that examines the way information is portrayed in ART. Depending on who we are--economically, socially, ethnically, spiritually--determines how we TELL OUR STORIES. As a descendant of Aboriginals, the Vanuatu in northeastern Australia, Daniel Boyd was particularly interested in investigating the British artwork done at the time the British colonized Australia. The conceptual ARTWORK he makes in response to his investigations is thought provoking.
As everyone knows, when a land is overtaken by foreign invaders, unspeakable horrors occur. However, this rape, killing, and destruction of communities is often not documented by the invaders in their ART. Certainly, in the case of the British invasion of Australia in 1788, this is true. Archived in the Natural History Museum are watercolors painted from the perspective of the violent invader. These watercolors document the flora, fauna, and historical moments of the British interaction with the indigenous people of Australia. As an American of European descent, these skilled and beautifully executed watercolors resonate with the sense I have of my own country's history as conveyed in ART. And I have never questioned the perspective of these images as any other than the HISTORY or STORY that WAS (how embarrassing!).
Daniel Boyd has spent his time at the Natural History Museum examining these colonial watercolors and asking questions. What information is not being told? What information was lost and not recorded? What are the stories surrounding this piece of art? As he asked these questions about these historical watercolors, he began to create his own body of ART in response.
Taking copies of the watercolors and other iconic images of Australia, like Sydney Harbor and Captain Cook, he painted over them and then layered them with textured dots that dazzle and reflect light. He framed these obscured images in museum archival boxes. What information has been lost now? What new stories are being told in Daniel Boyd's images? More than twenty of these complex images are hung in a display case as part of his exhibit, "Up in Smoke Tour."
Next to those images and adding to the complexity of  Daniel Boyd's exhibition is a display case of discarded archival boxes that formerly housed human remains collected by the Natural History Museum. This collection of plain and unadorned boxes stacked unceremoniously is disturbing and demanding of thought. While doing his artist in residency at the museum, he has worked along with the anthropology department to find human remains of Australian Aboriginals and found a skull that came from his area of Queensland and is now working to get the skull returned to Australia. 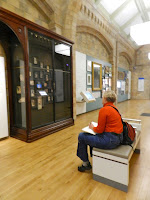 Daniel Boyd's work is significant. He has made me rethink my own ability to look at an image and read that image honestly, deeply and widely. He has also made me realize my own sense of privilege thinking that my own ancestors' bones have been appropriately honored in burial instead of housed in a museum in a foreign country. His questions have heightened my awareness and left me disturbed. Isn't this the DUTY of ART and the WORK of a SPIRITUAL ART PILGRIM? Thank you Daniel Boyd.

That's COFFEE WITH HALLELUJAH. Soul Blog and tell me what your thoughts are about Daniel Boyd's work. Has this blog entry made you more thoughtful about ART and the STORY it TELLS?

Please view this video and see what Daniel Boyd has to say!
Posted by Ruth Schowalter at 5/10/2012