AMIDST THE AGONY OF FLOWERS, THE PRESENT NEVER ENDS: Contemporary Art (Sydney Part I) 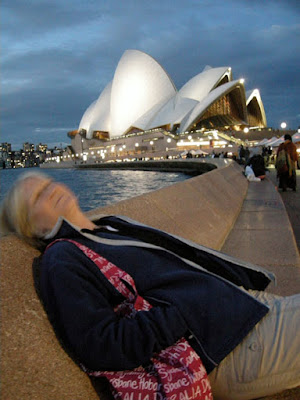 Hallelujah for the exuberant shiny cities of the world! Hallelujah for Sydney, Australia! My PILGRIMAGE took me to New South Wales to see what I might learn from being in the same landscape as Sydney’s iconic opera house and bridge.

Along the city harbor—at the opposite end of the opera house—is the Museum of Contemporary Art (MCA) which has dedicated its entire exhibition space from May 12th to August 1st to Sydney’s 17th Biennale (Australians say it like “bee-in-al-ee”). 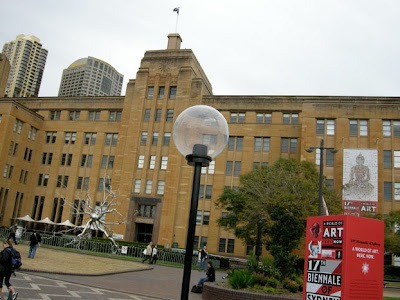 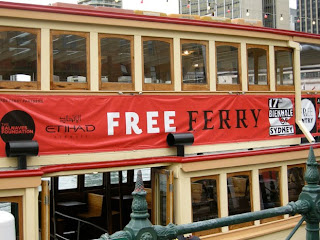 Although this celebration of contemporary art is housed in many venues around the city, its main venue other than MCA is Cockatoo Island, which is a free short ferry ride away from harbor quay. I spent some significant time at these two biennale sites and was discomfited. 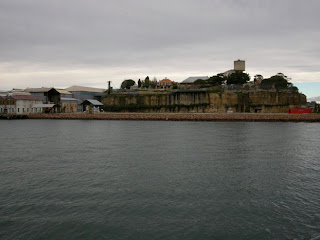 (The handy ferry picked Pilgrims up right out in front of the MCA! The foreboding Cockatoo Island was a dreary but novel place to view contemporary art. Its dilapidated buildings that once housed prisoners as well as industry and shipbuilding are haunting. Photos by Chiboogamoo)

Dear FELLOW PILGRIMS, please understand and accept that Hallelujah does not happily involve herself with contemporary art. I find that consuming this kind of conceptual art is akin to taking strong bitter medicine with uncertain beneficial results. Yet on my JOURNEY, I am dedicated to broadening myself—and Sydney was offering me 285 works of contemporary art done by 92 international and Australian artists—and it was made accessible to the public like Hallelujah because it cost nothing! Imagine a country using its tax money to make its museums available to all of its citizenry—definitely a palpable statement that ART is important. ART does provide EDUCATION. Hallelujah would like to explore the kind of education the biennale provided her.

“The Beauty of Distance: Songs of Survival in a Precarious Age,” is the biennale’s theme this year (You see British artist Jonathan Barnbrook’s graphic design done for the logo on the museum and ferry.) Hmmm…what does this 11-word title mean? I acknowledge David Elliott, the artistic director of this particular biennale, for a somewhat satisfying but too long explanation. Here is Hallelujah’s summary of what he said:

v ART is simultaneously unique (made by an individual) and universal (its meaning is relevant to us all).

v ART elevates human experience and separates us from its immediacy.

v ART being made now is diverse and represents CHANGE.

Hallelujah is arching one eyebrow skeptically. Was the theme of the biennale made broad enough to include ANY work the curators might like to show?

Okay, what did Hallelujah GATHER from this large emotionally-loud exhibit of contemporary art? Like posies in a basket I will list my responses:

Posey 3: SURPRISING INTRIGUE—Some works took hold of me. For instance, Bill Viola’s black and white video of a naked man and woman, “Incarnation,” touched Hallelujah like a religious experience. The moving image was projected on a screen the size of a doorway, which was in a large dark room. As the viewer is approached by the man and woman, who are walking very closely to one another, a point of light slowly evolves from the woman’s hand and grows into a waterfall. Moments pass as she and the man are separated by the cleansing water and then reunited. The video repeats endlessly—emerging, separating, and reuniting.

Using video, Thai artist Araya Rasdjarmrearnsook interviews rural farmers about as they sit in front of famous artworks like Vincent Van Gogh’s “The Midday Sleep.” Their interpretations based on their knowledge and experience truly demonstrate that we understand new things based on what we already know! Why did they keep talking about elephants while looking at Jean-Francois Millet’s “The Gleaners”?

Posey 5: CONNECTION—Hallelujah found a soul mate in young Chinese media artist Cao Fei (born in 1978). Her 2009 animated video, “People’s Limbo,” was a humorous yet intellectual and multi-cultural presentation of the hodgepodge of current economic theories. Hallelujah laughed joyfully at Cao Fei’s colorful and beautiful depictions of Karl Marx, Mao Zedong, Lao Tzu, and Lehman Brothers, especially when they are playing some kind of game similar to hacky sack with a Chinese toy!

Posey 6: DISENGAGEMENT—Too many works presented an idea—Okay! Hallelujah understands the idea and does not need to stay for the complete execution of the entire idea because it is neither fun nor interesting. For example, 100 photographs of Filipino domestics and their work spaces in Hong Kong with a hidden (fake) hand grenade positioned somewhere in their employers’ homes. OR—Hallelujah does not understand the idea, but the idea is not promising to be fruitful even if Hallelujah commits herself to understanding it. Yayoi Kusama’s collages are pretty. I like polka dots. I like her word conglomerations, but….“Let’s LEAVE soon,” I begin to utter under my breath.

Final Posey: HORROR and ANGER—Guatemalan Regina Jose Galindo’s political work is a bitter pill to swallow. In her 2007 video, “Confesion,” she has a strong man repeatedly submerge her head into a barrel of water. Its violence nauseated me. Before entering the building, I heard the gasping sounds as her head was forced into the water, and when I saw the image, I had to leave immediately, not only her work but the entire biennale and Cockatoo Island.

ART matters. ART is powerful. Contemporary ART is surprising, challenging, discomfiting, frustrating, and sometimes quite horrifying. Hallelujah prefers ART to hold her and rock her like a baby, to be a lover and to entwine body and soul with her. Yes, Hallelujah wants ART to be a GREAT SPIRIT and to infuse her. I don’t want to be angered or disgusted or alienated. I don’t want to feel so many negative emotions—for what and why? Why?

Sydney provided me with this amazing sophisticated experience. The poseys I collected at the 17th biennale filled me with wonderous agony! But I must ask this pressing question: To learn from ART is it necessary to cast oneself at the feet of contemporary ART? As Yayoi Kusama says, “Admist the agony of flowers, the present never ends. ” 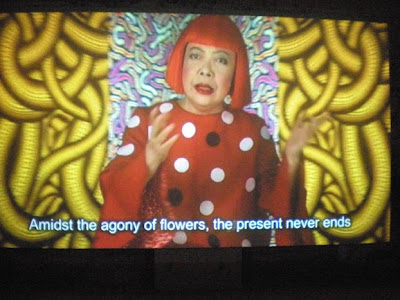 Photo: Free and senior spirit Yayoi Kusama (Japan, born in 1929) presented “Song of Manhattan Suicide (2010). Dressed in polka dotted clothes, she frames herself portrait size, from chest up with colorful collages and recites words in an eery sing songy voice. Her ghostly song summoned Hallelujah into the dark theater. The lack of continuity of a meaningful sequence of words made it seem unnecessary to stay long. 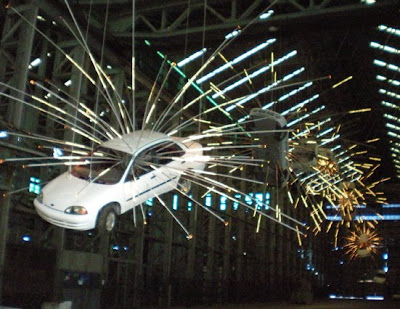 Photo: Cai Guo Qiang (China, born in 157) “Inopportune: Stage One.” Nine identical white cars depicted exploding. The immensity and startling majesty of this project impressed upon Hallelujah how something awful can be so awesomely stunning. 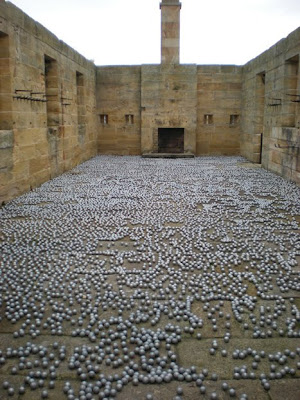 Photo: Serge Spitzer (Romania, born in 1951) “Molecular” was staged in the roofless guardhouse on Cockatoo Island. He filled the architectural space with metal balls—Randomlessness? Transformation? Meaning?