ART as a POLITICAL and SOCIAL ACT (Sydney Part II) 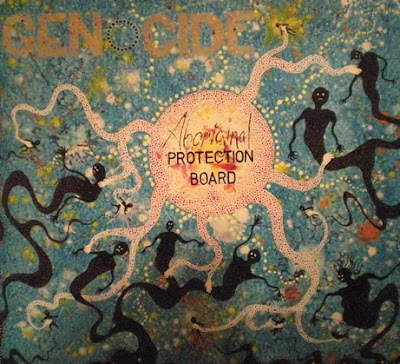 Dear Fellow Pilgrims, the Australian Museum is not free, but as it is dedicated to many aspects of life both natural and cultural, both Hallelujah and her Chiboogamoo decided to pay the fee to enter its worthy exhibits. Although Hallelujah rejoices in megafauna, dinosaurs, and all things geological that she can share with her Chiboogamoo, she chose to study in depth the museum’s Aboriginal cultural exhibit. Specifically, I looked at the work of a contemporary artist—Kevin Butler—who grew up in Sydney. His work demonstrates how ART can serve political and social needs.

When Kevin Butler was 2 weeks old, he was stolen from his biological parents and given to a new set of parents. The year was 1962; the country was Australia. He was Aboriginal. His adoptive parents were not. Their job was to assimilate him into mainstream white Australian culture so he could be a “useful” citizen. This was the ideology of the “Aboriginal Protection Board.” Butler is one of 100,000 people who are now called the “Stolen Generation.” 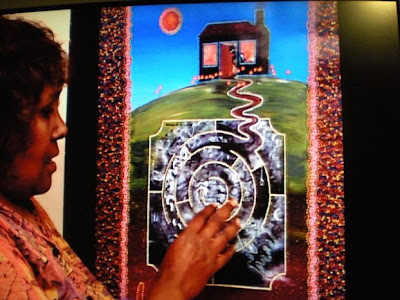 (At the opening to Butler's 3D maze, a video using a painting of the maze explains the labyrinth of social horrors that many children from the Stolen Generation have encountered all of their lives.)


His 3-dimensional work there in the Australian Museum in Sydney is a physical maze with paintings that has the viewer walk through a visual representation of the tribulations that the Aboriginal child encountered during his upbringing in a non-Aboriginal household.

This work, ironically called “Assimilation,” combines both a modern sense of story telling with an Aboriginal style of painting with dots that began in the central desert of Australia. Butler’s execution of imagery is startling bare, and his emotion is raw. The assimilation, the viewer discovers, is domestic violence, alcoholism, racism, suicide, depression, and poor health. 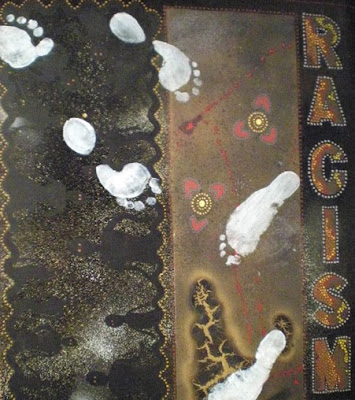 His work serves the invaluable function of articulating to two social groups (Aboriginal and non-Aboriginal) the horrible reality that members of the stolen generation have experienced. His ART evokes understanding and ultimately empathy from its viewers. As a United States citizen, Hallelujah thinks of the indigenous people who were living in North America when the Europeans landed on its shores and the similar problems they are experiencing in their communities today. 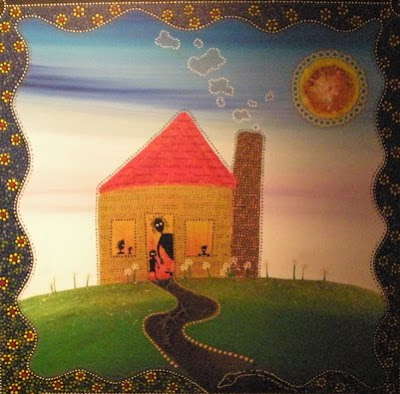 Currently, Butler is a recognized and productive artist, who is also involved with public artworks, having completed 27 murals for various libraries and public schools. It is interesting to note that he began painting in 1988, when Australia “protested/celebrated” its bicentennial. From the aboriginal perspective, a 30,000 to 40,000 year old one, it was a protest. Their country was much older than the 200 years of rule that the white colonizers from Britain were celebrating. Butler started to paint in order to “express his spiritual connection” with his Aboriginal land and culture. To assist other Aboriginals in connecting with their heritage, Butler is involved with the organization, Link Up, which not only helps adult aboriginals from the stolen generation find their biological parents but also provides them with counseling and support. 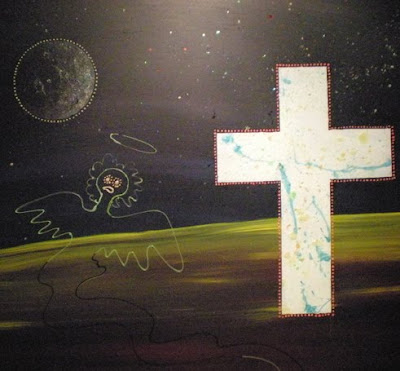 Hallelujah is in awe of Kevin Butler’s difficult and artful journey. The work she shows here are snippets photographed from his MAZE in the Australian Museum. MAZE… is part of the word—AMAZED. Thank you Kevin Butler for your strength, your spirit, and perseverance, and productive survival. Thank you for your dedication to help others find themselves in the JOURNEY.

Hallelujah asks all of her FELLOW PILGRIMS--Is YOUR JOURNEY a MAZE? Are you AMAZED on your JOURNEY? Please SOUL BLOG Hallelujah your thoughts about this journey. Bless you one and all!