HALLELUJAH’S PILGRIMAGE: I Belong to this Earth! 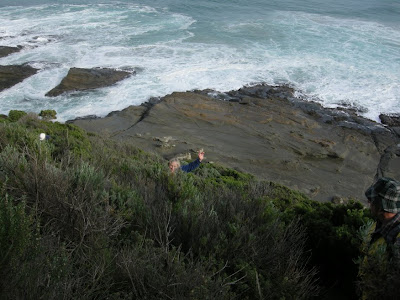 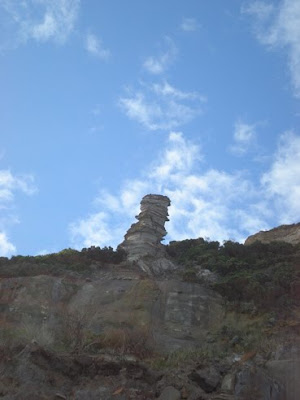 Dear PILGRIMS what is a PILGRIMAGE? Hallelujah describes her own PILGRIMAGE as a willing JOURNEY into the unknown with the explicit purpose of learning more about ARTFUL LIVING. Often, there is some disquieting but reasonable apprehension involved, so courage must be employed.

Recently, during my visit to the coast of Victoria, Australia, to join my dear Chiboogamoo, I became entangled and enmeshed with the EARTH, SEA, and SKY in a unique way that caused me to learn more about myself and the enigmatic world surrounding me. I truly was a PILGRIM in alien territory.

(Top photo: Hallelujah peeks out from the vegetation. Left photo: The tower we hiked to on Milanesia Beach. Right photo: Geologists conferring about how to get to Rotten Point!) 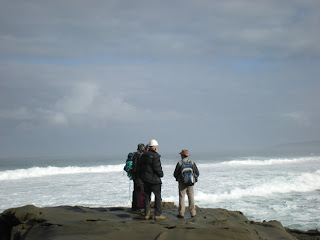 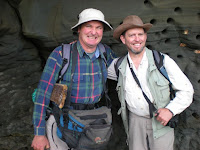 Chiboogamoo’s paleontological research brought us to the cliffs hovering above the sea and jutting out into the cloudy coastal sky. Each day we had a destination with wonderful sounding names like Skene’s Creek, Milanesia Beach, Rotten Point, Dinosaur Cove, and Wreck Beach. For news of my husband’s engaging scientific work at these exciting sites along the Victorian coast, visit his blog--The Great Cretaceous Walk.

(Photo right: Greg Denney with my Chibogamoo at Dinosaur Cove. You can see where the geologists drilled for cores behind them.)

Hallelujah sighs! If our work had only been to go to the cliffs along the Great Ocean Road and stare out at the white fluffy clouds lingering in cobalt blue skies above a gray winter ocean, I would not have had the PROFOUND PILGRIM EXPERIENCE, nor the resulting story to tell. Our fieldwork crew had to descend to the rocky shore to search for fossil traces—evidence of living creatures burrowing and moving about on this earth 100 million years ago. 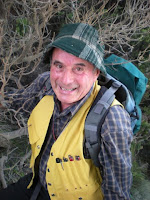 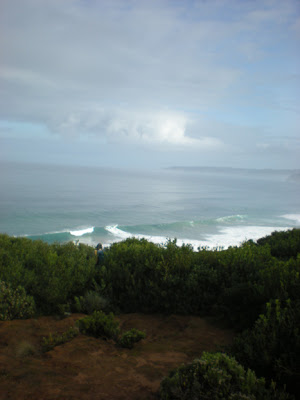 (Photo left: Mike Hall, retired geologist from Monash University. Photo right: Greg and Mike have disappeared into the bush. I am to follow.)

Reaching Rotten Point stands out as the most memorable day of my fieldwork with the “boys.” From our 4-wheel drive vehicle, we walked along an overgrown road sprinkled with white quartz from the Tertiary, a period dating back from about 40 million years ago (This kind of insightful information is offered by my Chiboogamoo—thank you Honey!). The flat sloping road was fairly easy to navigate. Echidnas, creatures that resemble porcupines, had been digging for ants and had left the ground heavily turbated--uneven, which made us concentrate ever so slightly so as not to trip. I learned from Greg Denney, the owner of the property we were traversing and a member of our fieldwork crew, that the delicate red tube shaped flowers dotting the quartz road was heather, the state flower of Victoria. Oh HALLELUJAH! Life is GOOD—echidnas, quartz, Victorian heather, sky, sea, and excellent companionship.

Rather abruptly our 20-minute road walk ended at a wall of thickly grown bushes. We stared at the wildly powerful ocean pounding the rocks about 600 feet below. The force of the water hitting the earth created oodles and oodles of white froth, floating everywhere and seeming to fly across expanses of rolling waves. 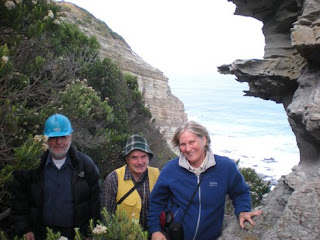 Imagine Hallelujah’s surprise when Greg Denney found a way into the bushes. Like magic, the branches and leaves opened up and our guide vanished! Mike Hall, a retired geologist from Monash University followed. Then my dear Chiboogamoo dove in. Tom Rich, the paleontologist from the Museum of Victoria, told me to go next. Gulp…Me? I inhaled and ducked my head, crouching into the darkness created by the arbor of branches. The Australian boys call this “bush bashing.”

(Photo Right: Tom Rich from the Museum of Victoria, Mike Hall, and I pose for a picture by the rock tower that we hiked up to from the beach below at Milanesia Beach.)

As I moved down the vertical face of the cliff, I held onto the branches, asking them not to bite my ungloved hands, not to catch and hold my clothes, not to tear the flesh on my arms and legs. I was thankful when my feet wedged between the hardened wooden bases of the bushes. To my surprise, I discovered we were following a wallaby trail—the fresh scat alerting me to their most recent presence along this very small trail. I was moving through the shrub at wallaby height—about three and half feet high! 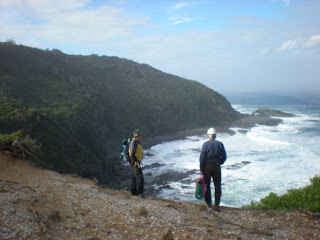 At spots without the wallaby trail and the wedging created by their small and well-used trail, I was much less secure. My feet were slipping on the rain soaked soil, and I felt myself falling down the incline, only to have a branch offer itself to me until I found sure footing once again. I held hands with these shrubs, I hugged them, I fell to their feet and became covered with mud on hands and backside. Hallelujah for MOTHER NATURE. Hallelujah!

(Photo left: Mike and Tom look down on Dinosaur Cove. We will walk around to this cove after getting down to Rotten Point first.)

During this descent to the shore, MOTHER EARTH embraced all of me. How intimate to be next to HER and SHE so generous, supportive, and alive! I was enclosed in HER scent, HER soil, and HER vegetation. SHE heaved me down to HER rocky shores with my heart beating strongly. I felt the pounding of HER waves in my bones. I felt PRESENT.

Meanwhile, the geologists conferred. Standing on the gray shale platform extending out into the sea, they decided we could not get to Rotten Point from here. We would have to ascend the 600 feet we had just travelled down and take a different route back to the shore. 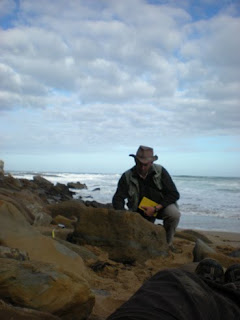 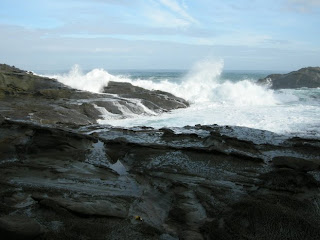 Once again we submerged ourselves in the miniature forest of shrubs along the coast. My day proceeded in continued intimacy with the GREAT MOTHER. SHE did not disappoint me once as I walked along HER surfaces, climbed beneath HER branches, slid down HER hillsides, and balanced on the rocks that had eroded from HER cliffs.

(Photo left: Crashing waves showing the energy of this Southern Sea! Photo right: My Chiboogamoo working on exciting fossil traces at Milanesia Beach. Notice Hallelujah's boots on the bottom right half of the photo.)

This PILGRIMAGE stopped time for Hallelujah. The knowledge I gained was EMOTIONAL—VISCERAL: I BELONG TO THIS EARTH. I am part of INFINITE TIME. Where there appeared to be no path, there was one. It was not a human path but a trail made by a much smaller animal living right there. We are part of a HUGE LIVING WEB in the VASTNESS of TIME.

Hallelujah loves all of you. We are all connected, and each one of us is precious. Tell Hallelujah about your BELONGING, your EARTH EXPERIENCES, and what you have learned on your pilgrimage today.