Right after Christmas 2011, Paleontologist Barbie collected her snorkel, mask, fins, sun screen, and superlative knowledge about how to teach the concepts of uniformitarianism out in the field, and headed to the farthest island on the Bahamian platform—San Salvador. Working alongside my Chiboogabmoo (aka, Tony Martin) and Stephen Henderson, her esteemed paleontologist colleagues, Paleontologist Barbie herded 12 Emory students to their spartan accommodations—the Gerace Field Station (GRC). Adapted from a US Naval base more than 30 years ago, the GRC is the perfect place for recovering from a hot day out in the field. The Bahamian staff prepare excellent meals three times a day and keep the compound equipped with a library, classrooms, labs, auditorium, and rooms are pristinely clean. Perfect for 11 days and 10 nights of science education exploring modern and ancient environments!
Paleontologist Barbie agreed to be interviewed here in Atlanta, Georgia, USA, as winter turned into spring and she got a moment free from her paleontological explorations along the Georgia coast.
HALLEUJAH TRUTH: Why is San Salvador, Bahamas, an excellent destination to teach uniformitarianism using modern and ancient environments?
PALEONTOLOGIST BARBIE: San Salvador has sediments and rocks that are both made of calcium carbonate. And the calcium carbonate can cement really quickly. This means the sand they see today can become rock tomorrow. So the students get to find out how modern environments can become part of the rock record almost overnight, geologically speaking.
HALLEUJAH TRUTH: Why is a field course like this so important for students to experience?
PALEONTOLOGIST BARBIE: For one thing, it gets them outside.  Much of their learning is in the confines of a college classroom. That's okay, but if they really want to learn paleontology and geology, we have to get them in the field. And in this class we're in the field every day.
HALLEUJAH TRUTH: What was the first thing you and your colleagues Chiboogamoo and Stephen Henderson did with the students after getting to the field station?
PALEONTOLOGIST BARBIE: We took a walk into the Precambrian. There is a lake on San Salvador, Storr’s Lake, that has such high salinity that nothing can live in it except bacteria, algae, and a few small snails and fish. 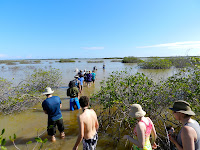 HALLEUJAH TRUTH: What is the lesson they learn there?
PALEONTOLOGIST BARBIE: Storr’s Lake has stromatolites, and it is one of the few places in the world that has those. These are hard-layered colonies of bacteria and algae that form dome-like structures.  What’s really cool about these structures in Storr’s Lake is that they are very much like stromatolites from the fossil record going back more than 3 billion years ago.
HALLEUJAH TRUTH: Why do you have students walk into Storr’s Lake?
PALEONTOLOGIST BARBIE: We want them to experience what it is like to be in the Precambrian before animals were ruling the earth. Instead, bacteria and algae are ruling Storr’s Lake. Isn’t that neat?
HALLEUJAH TRUTH: Can you tell us more about stromatolites?
PALEONTOLOGIST BARBIE: Sure, I love stromatolites! Sometimes they look like cabbages. Some times they look like cauliflowers or maybe a weird onion. They have layers on top of layers where the ones on the bottom are the oldest and are the remnants of bacterial and algal colonies. The layers on the top are living colonies, so this shows how they grow upwards towards the light because these bacteria and algae are photosynthetic. That is one of my favorite words—photosynthetic!
So let’s see the formula for photosynthesis is 6H2O + 6CO2 (sunlight) --> C6H12O6 + 6O2 (Paleonotolgist Barbie giggles as she sings the formula for photosynthesis out loud from memory!)
HALLEUJAH TRUTH: At Pigeon Creek, where you give students the opportunity to snorkel, you also give a lesson about harvesting conchs.
PALEONTOLOGIST BARBIE: Pigeon Creek is a beautiful lagoon that empties into the Atlantic Ocean from a tidal creek. I always love going there, but I'm also made sad by the piles of dead conch shells on the shore. All of these conchs were killed by people for food. But people have taken so many of them that there aren’t very many left anymore. I tell students that conchs shouldn’t be harvested if they don’t have a lip, which means they’ve reached the maturity to reproduce.
HALLEUJAH TRUTH: What else do you have students look for in Pigeon Creek?
PALEONTOLOGIST BARBIE:  Because Pigeon Creek is a lagoon, it has lots of mud, burrowing shrimp, clams, and mangroves along its edges. Some of these get preserved in the fossil record, some don’t. We ask students, “What would you expect to see from this lagoon in the fossil record?”
HALLEUJAH TRUTH: I can see that this particular aspect of teaching in the field delights you. You can talk about this excitement?
PALEONTOLOGIST BARBIE: We get to use our minds and our bodies at the same time. If you are snorkeling over a reef, you are physically engaged but at the same time you are identifying the corals, examining the fish and their behavior, and figuring out how those whole ecosystems are working. I can’t think of anything more fun to do in the field--having fun while having deep thoughts.
HALLEUJAH TRUTH: Do you give students maps of San Salvador? What do you want them to learn about navigation?
PALEONTOLOGIST BARBIE: Yes, we do give them a map of San Salvador. Maps are really cool tools! We want them to learn how to use them. Every day we like to ask the students to point to north. The first day they're pretty bad at it. By the second or third day, they are starting to understand how the position of the Earth’s Sun—and I like to call it the Earth’s Sun because of my interest in astronomy—tells them which way is east, south, west, and north.
The maps help them too, because when we see a big lake or a lagoon or different cays that are offshore, those can also help the students understand where they are. So they then get what a lot of people call “a sense of place.”
HALLEUJAH TRUTH: Yes, “a sense of place”—I like that idea! And it is also good to see how this “one place” or an island like San Salvador can be so different from one end to the other. Can you say something about these differences?
PALEONTOLOGIST BARBIE: Excellent question! The southwestern end of the island is called Sandy Point, which is because it has the most sand-duh! But that is totally different from the northeastern end of the island that has a rocky coastline made from rocks formed about 5,000 years ago.
HALLEUJAH TRUTH: You use the terms, bioerosion, limestone, Pleistocene Epoch, trace fossils, can you give me a quick lesson here?
PALEONTOLOGIST BARBIE: Sure. Bioerosion just means the process where animals and plants wear down rock. So some snails, for instance, are chowing down on algae that might be on coastal rocks. While they are scraping that algae, they are also breaking down the limestone. Parrotfish--those are my favorite bioeroders--they crunch on coral to get the algae. And I am embarrassed to say it, but what comes out the other end of the parrotfish is the sand that you end up lying on along the beach! Ewww!! (Paleontologist Barbie smiles devishly.) That’s right, most of that beautiful white sand on a beach in the Bahamas is parrotfish poop!
I guess I could write a dissertation on each of those topics, bioerosion, limestone, Pleistocene, and trace fossils. So I'll just summarize here: There are Pleistocene and Holocene rocks that have trace fossils on San Salvador. These trace fossils tell you what environments made the limestones.


HALLEUJAH TRUTH: Did you and the students have any leisure time during the 11 days you were on San Salvador?
PALEONTOLOGIST BARBIE: Well, not much during the day. There was no time to lie on the beach and get a tan. But at night, sometimes we walked the mile-and-a-half to the nearest bar, called The Short Stop. This is a long time tradition for geologists, paleontologists, and biologists to go to the Short Stop and talk about what we learned during our time in the field while quenching our thirst. We also spent New Year’s Eve there, so the students got to experience a little bit of Junkanoo, which is the Bahamian New Year’s festivities.
HALLEUJAH TRUTH: Yes Paleontologist Barbie, I know you enjoyed your Kalik and the ART on the walls of the Shortstop.  I always like to discuss ART with you since you see a natural connection between science and art. What did you think of the sculptures made by San Salvador’s master woodcarver, Kenny Whitfield?
PALEONTOLOGIST BARBIE: I thought his carvings were brilliant! It was amazing to watch him work so quickly but so precisely. He would take a hunk of wood and instantly transform it into a sea turtle, a sea star, or a grouper!
HALLEUJAH TRUTH: Let’s wrap this interview up! You have been to San Salvador many times, but I know you always look with fresh new eyes. What did you discover on this visit that you hadn’t seen before?
PALEONTOLOGIST BARBIE: You’re right! I always try to really look for something new because I know nature is always changing. This time I was especially attentive when we went to Sandy Point. I had a blast looking at all the tracks there! I also imagined how those tracks might get preserved in the fossil record! Who knows? Some day, tracks just like those of the hermit crabs and herons might be found in the rocks of San Salvador.
Read previous Hallelujah Truth Interviews with Paleontologist Barbie:

ACKNOWLEDGEMENTS. Big thanks to the Gerace Research Centre, San Salvador, Bahamas, to Dr. Thomas A. Rothfus for his assistance and maintaining a well run and clean field station, and to his Bahamian staff that provide hot meals with smiles and rooms free of sandy floors. It was a pleasure sharing many a meal with Dr. Kari Benson, from Lynchburg College, and her three sons and husband. She gave great lectures on fish of the coral reef! I especially want to thank Chiboogamoo's group of students who embraced Paleontologist Barbie into their fold.
Posted by Ruth Schowalter at 4/01/2012