Since the C4ward March Blogathon Day 13 Prompt is about contemplating the relationship between me, the artist, and my communities (see the end of this blog entry for the complete prompt) I am choosing to write about my involvement with the science community--specifically how I support my husband Tony Martin who is both a scientist and an artist.

Today, I followed Tony Martin, to the University of Illinois at Chicago so I could observe him talking with university students in the Department of Earth and Environmental Sciences about how to use images to expand and enhance scientific ideas, something he has done in his two most recent books, Life Traces of the Georgia Coast (2013) and Dinosaurs Without Bones (2014).

Invited by Professor Roy Plotnick, an academic hero in his own right and colleague, Tony was delighted to eat pizza with the students at a brown bag lunch and to regale them with his humor, images, and ichnological knowledge. 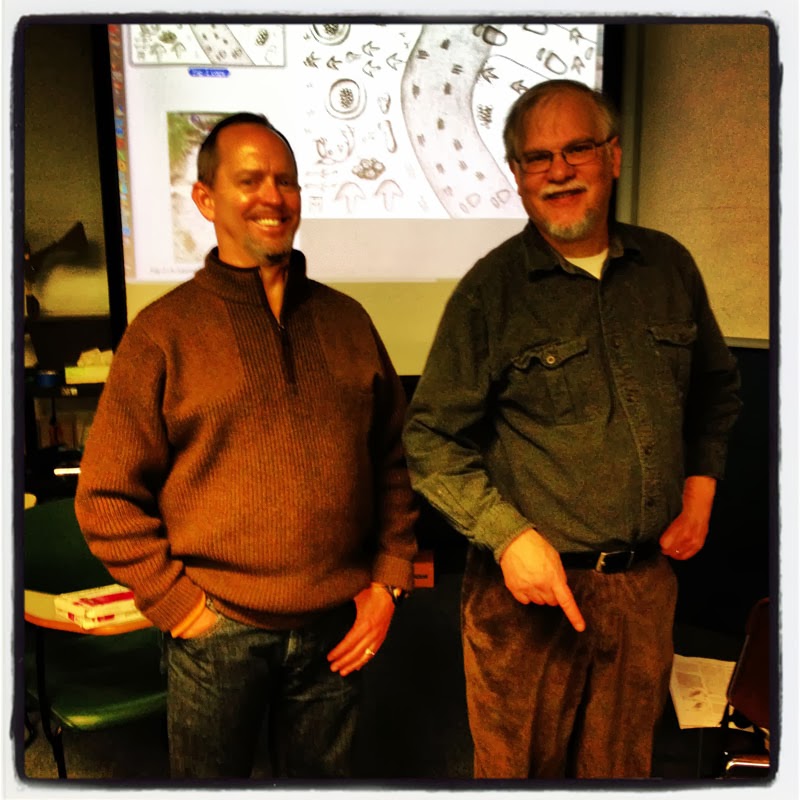 Using both photographs and line drawings, Tony explained how to communicate scientific information. He started with a comprehensive line drawing of an imagined landscape with a vast variety of dinosaur traces by asking the students what dinosaur behavior they could see or "read" from it.
As he applauded their correct deciphering about nests, feces, and tracks, he coached them to discover the traces resulting from dinosaur behaviors that most people just don't think about--urinating, vomiting, and gnawing on other dinosaur bones.
Part creativity coach and so much scientist, Tony cheerily told students that they could create such scenarios and draw them. After tossing a whiteboard marker to one student, which she caught, he encouraged all the students, "You have the hand-eye coordination to catch that. You can draw."

Also using photographs, Tony talked to students about how to express scientific concepts. He showed an image of numerous sauropod tracks. He said if you looked at this closely enough, you would see five sauropods moving in harmony, evenly spaced, parallel to one another, moving together.  What dinosaur behavior would you interpret?  Students did not immediately answer "herding," but they got it in the end. Seeing a dinosaurian behavior as it was recorded in the fossil record is a valuable and alternative way to understand that information.

"Look at patterns and translate them into something meaningful," Tony said to an appreciative group of students, as he took a bite of pizza. He went through slides of photos and illustrations depicting dinosaur behavior. We saw a photograph of 3,000 dinosaur tracks from Lark Quarry in Winton, Queensland, Australia, that were eloquently mapped. 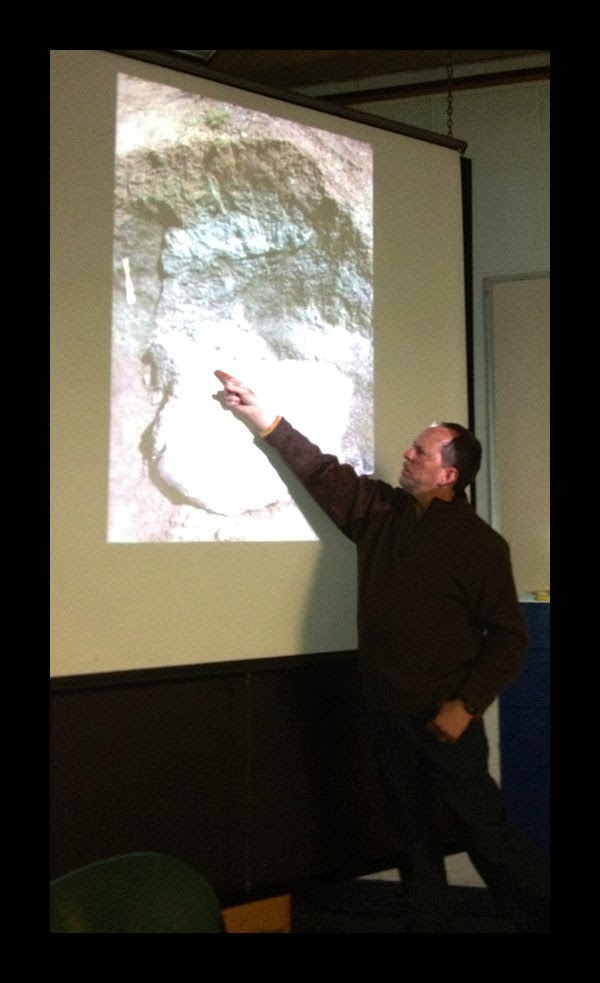 There was an illustration where Tony let his imagination go wild as he envisioned the traces that would have been made by sauropods or theropods having sex. And, yes, college students wake up a little bit when sex is brought up in the discussion! Tony told students that maybe traces of dinosaur sex haven't been found yet because scientists are too prudish and that maybe there is a need to get more "dirty."
He showed images of cocoons found in rims of dinosaur nests, dinosaur burrows, termite borings, healed bite marks in dinosaur bones, dinosaur urine traces, and imagined projectile dinosaur vomit.  Oh, what a brown bag lunch discussion it was! Good photographs and illustrations help everyone learn the search patterns that lead to future discoveries.

The hour went by quickly, dissolving into a flurry of pizza boxes being swept away, soda bottles, paper plates....

That's Coffee with Hallelujah! SOUL BLOG with me and tell me what your role as artist in your community is. Would you like to join my Facebook group, The Daily Creative Practice, that I created one year ago to establish a warm supportive community for us creatives? Click here.

CONTEMPLATING COMMUNITIES (The Rest of the C4ward March Blogathon Prompt):


Think about your relationship as an artist or artistic entrepreneur to your neighborhood, city, and region. Then respond to these two questions:
Question 1 (Artists Contributions):