In May 2012, Paleontologist Barbie, my Chiboogamoo (a.k.a. Anthony "Tony" Martin), and I visited the United Kingdom, a great place to broaden our knowledge about paleontology as a science and how it is portrayed in art. Therefore, we visited Crystal Palace Park in south London to see a wonderful group of 19th century sculptures of dinosaurs and other prehistoric animals created by artist Benjamin Waterhouse Hawkins.

Hallelujah Truth: Can you tell me why it was so important for you and Chiboogamoo to visit Crystal Palace Park?

Paleontologist Barbie: Yes, I would love to tell you! Completed in 1854, these sculptures were the first such pieces that attempted to recreate dinosaurs, Mesozoic marine reptiles, and large Pleistocene mammals. So they have artistic, historic, and paleontological significance. For me, and anyone else for that matter, this visit to Crystal Palace Park was a big deal.

Hallelujah Truth: What did you like the most about seeing the dinosaur statues in situ on an island?

Paleontologist Barbie: I not only loved how they were arranged on an island surrounded by water, but also how some of the non-dinosaurs are in the water. Plesiosaurs, ichthyosaurs, and crocodile-like animals are shown in what he thought were their natural habitats.

Hallelujah Truth: What can the average person learn by visiting Crystal Palace Park?

Paleontologist Barbie: They can learn how science and art often change together through time. These artworks are based on thoughts about prehistoric animals in the 1850s, and today, we have very different art showing the same animals. The fossils stayed the same, but our views of them changed. Artists help us scientists visualize our thoughts about fossils. That's why I like to keep my "artist" muscle in shape!

Hallelujah Truth: Has this given you any additional insights about how art and science are used together to reach out to the public?

Paleontologist Barbie: Sure! I mean, if you look at news stories about a new fossil find, almost every one of them has some pretty picture, like an artistically arranged photo of the fossil itself, or an artist's recreation of the fossil as a living plant or animal in its original environment. You can even see how art is used at the entrance of Crystal Palace to lure park guests in to visit the statues, even though it uses more mainstream images of dinosaurs.

Hallelujah Truth: Have you been inspired by these Crystal Palace Park creatures?

Paleontologist Barbie: Definitely! Wouldn’t it be fun to see the statues of Iguanodon and Megalosaurus fighting? Or the ichthyosaurs or plesiosaurs going for the same fish? I would like to see these sculptures interacting with one another instead of how they are shown now--isolated and not even looking at one another.

Hallelujah Truth: Is there anything else that you wanted to do while you were at Crystal Palace Park?

Paleontologist Barbie: Yes! It would have be such great fun to get out to the island and actually climb on the statues! (She giggles a loud TEE HEE!) How cool it would be to get on the back of a Megalosaurus or an Iguanodon. But I understand that they can’t have people going out there. I guess I could have asked for permission, but I don’t think the British government even knew I was in the country.


Acknowledgments: As always thanks to my Chiboogamoo, aka Tony Martin, who channels the spirit of Paleontologist Barbie after drinking two beers! His enthusiastic and sincere support of women in science deepens my own commitment to learning more about the science of the world surrounding me. 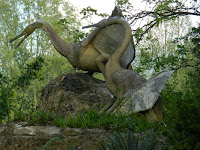 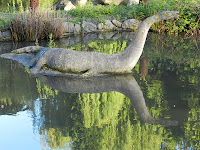 Thanks to Benjamin Waterhouse Hawkins who envisioned and made these terrific sculptures from the findings in the 19th century! They are thrilling to see in the 21st century! Time keeps marching into the future!

Paleontologist Barbie's Gleeful Discussion of Evolution, Darwin, and Science-Related Art
Paleontologist Barbie explains her understanding of evolution by looking at the "Selections" art exhibit at Fernbank Museum of Natural History in Atlanta, Georgia. Specifically, she provides her interpretation of the importance of art done by Chiboogamoo and Hallelujah Truth. 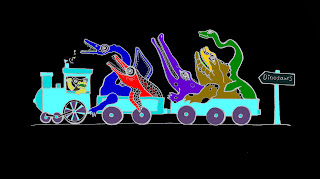