ART AND COMMUNITY: AN AFTERNOON WALKING THE ATLANTA BELTLINE

Hallelujah for JOURNEY, for moving throughout one's community on a TRAIL made exuberant with ART! Hallelujah for my city of Atlanta, which has just today officially opened its Eastside Trail of a much larger endeavor called the Atlanta Beltline! 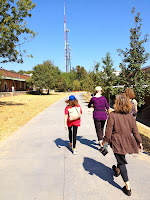 The Eastside Trail provides a wonderful 2.25 miles of a smoothe concrete path large enough to dance on, commune with the ART, "strangers," and those who live along this newly emerged artery of Atlanta! All of us still feel slightly surprised that this Eastside Trail connects five Atlanta neighborhoods (Inman Park, Old Fourth Ward, Midtown, Poncey Highland, and Virginia Highland)! Moreover, this pathway, is offering a new alternative to our workweek morning commutes to downtown! Imagine traversing the city without automotive traffic and stoplights! Hurray! 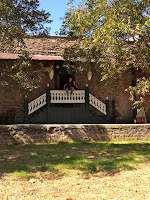 Our Saturday afternoon ART stroll was made magnificent by the abundance of people all seeming connected magically by the Eastside Trail! People who live in these re-interperted industrial spaces alongside the path are experiencing human traffic outside their front doors which used to be former loading decks for trucks! 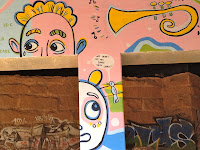 As our bevy of ARTISTS moseyed along this Eastside Trail, we paused to take in the ART and to resonate with it or at least to understand the artists' intentions. There was so much excitement in the fall afternoon air because of the anticipation of the dedication taking place on the following Monday. As you can see in the photo with the "Steel Flowers," there is yet to be grass along the path. And in the future, there will be a transit system--is that right?


ACKNOWLEDGMENTS: A BIG THANKS to Jesse Merle Bathrick, who always has great ideas for gathering her creative bevy of friends! It was her organization that brought us together on this gorgeous Saturday in the middle of October in the year of 2012! She also fed us chocolate and grapes and had taxi money in her pocket in case we were too tired to walk back! Hurray Jesse!
Read about other Atlanta Art Events or Georgia Artists at the links below: