At the end of the summer 2011, I interviewed Atlanta Spiritual Art Pilgrim Jesse Merle Harris in her Candler Park home seated on Mulberry Fields, a community garden that she created with the help of her neighbors. At that time, Jesse was in training for a walking pilgrimage in France with friend and fellow artist, Judi Adkins Ingram. For various reasons we only just completed this interview at the end of October 2012 so this exchange is a brief window into Jesse's art making process.

HALLELUJAH: Give me your personal definition of ART.

JESSE: For me, it is the thing that wakes me up. A way of being that allows all my senses to be awake. When that is going on, it is like I am a butterfly catcher…wide awake and paying attention.

Making art helps me see all the connectivity and the miracles and the questions--the knowing and the not knowing. It moves me out of the realm of the mundane and connects me immediately with spirituality. Art is the creation and reflection of all of that process. 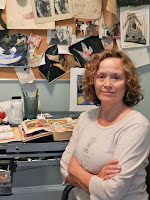 HALLELUJAH: What is SPIRITUALITY to you?

JESSE: It is being wide awake. To me spirituality is walking through the world and recognizing it as the Garden of Eden in some way. Living in the present, seeing the sacred in everything around us. It is not connected to religion or dogma. I do think all the creation stories are the same and attempts to capture that mystery.

HALLELUJAH: What is the connection between the ART you make and your spirituality?

JESSE: The connection for me is some kind of deep truth telling that I feel a powerful urge to do. It is personal truth telling, very personal. When I am wide awake and something is rattling, I have the urge to throw that butterfly net out and capture it. I have that experience of stopping time. It is a profound spiritual experience when you are in the moment with what you have captured in your butterfly net. That is art making.

It is mysterious, and I will never understand why certain images stay with me. For example, I don’t know why these two images have a hold of me--the angelic cherub and screaming head, but they do, and they have a story to tell.

HALLELUJAH: Can you talk about the journeys these images go on?

JESSE: Yes. The first time I saw them, they were in this boat, but my vision has definitely been shifting. I think one thing that has driven me to make my art is story telling. For a long time, I was attached to the story, but that isn’t as true anymore.

Now, I understand that there is an underlying story in the images. When I set them off in a boat, I didn’t know they would end up at the bottom of the ocean, in a garden, on trees, parts of furniture, and then end up in an urban environment.

I am watching these images come, and there’s lots going on in them. I don’t try to relate them to what is going on with me. Clearly, this series that I am talking about shows that things are not the way they seem. They are also about change and impermanence.

HALLELUJAH: Can you talk to me about this image where you are underground with the potatoes?

JESSE: I can go really far into the underground where I am not feeling the world around me. It isn’t depression; it is just flatness.  Last summer when Sally Wylde was dying, I was in that place for a while.

The garden helps me. I have spent a lifetime landscaping and building gardens, and this activity keeps me awake. I was digging potatoes and had the realization that I had been “sleeping with the potatoes.” For me, this means being buried, silent, and not aware of what’s happening in my creative unconscious. So I did a series of pretty quick crepas and collage images to process what was going on with my feelings about Sally.

I will have these phrases come to me like “sleeping with the potatoes” or “l hired a douser to look for my tears.”  These phrases are jumping off points for creating art. I didn’t cry all summer when Sally was dying. But these phrases led to the art that let me know I had a lot of uncried tears about Sally. In this way, I use my art to process my life. I have never had the urge to sell it or show it.


HALLELUJAH: Could tell me something about the pink playhouse, which is one of your recurring images?

JESSE: When we were moving my parents out of their house, and my father was dying, I found a lot of childhood artifacts including pictures of the perfect pink playhouse my father had built for my sister and me. He did a very loving thing. Then his mother ruined it by plastering it with “I Like Ike” decals and Republican elephants, and I hated it.

As I was losing my father, I was doing images about relationships and loss, mining the depths of the pink playhouse story.  I love to use crepas, making lots of images and scratching things out.

HALLELUJAH: And the pink playhouse moved you into your next series about being a twin?

JESSE: I was dreaming and dreaming about houses, a lost and found of houses real or unreal. That process connected me a lot to the twin thing. As a twin, I have a lot of stories about being connected at the hip and then finding myself. Through the series of stories, I ended up being alone. The challenge of being twins is finding your own identity within this powerful connection. It is not easy.

HALLELUJAH: In what way does your ART enhance your SPIRITUALITY?

JESSE: It wakes me up and gets me out of the underworld. I do believe that there are things that are cooking in the underworld. It is working in the garden, making art, or singing that makes me present. That’s what the goodies are: joy, sorrow which is a part of life, and wonder.

HALLELUJAH: Has SPIRITUALITY always been a source of your ARTMAKING?

JESSE: When I was a kid (eleven or earlier) and had a little art space in our basement, I would go down there and lose my connection to time. I could be down there for hours and not know it. Stepping out of time. I wouldn’t have known or called it spirituality. But is was being open in the moment. Looking back that is what it was. It was all about wakefulness to whatever was present.

HALLELUJAH: Who (artists, authors, friends, etc.) do you consider influential in the way you think, act, and make ART?

JESSE: Ruth Schowlater (aka Hallelujah Truth—thanks Jesse!). Sally Wylde because she took her life experience and put it into art even when it was painful. She made books when she was depressed and a performance when she was diagnosed with breast cancer.

Hallelujah Truth because she stays connected with the Divine and works at it every day, and I love her images.

My closest friends have artists’ souls. So I’m always learning in certain ways.

Chagall really wakes me up. Magic and mysticism inspires me.

HALLELUJAH: What is your purpose for making ART?

JESSE: To embrace all of my experience, dreams, memories, and what my senses are taking in. To express narratives that I create in my head. To be mindful.

ACKNOWLEDGEMENTS: Thank you to Kat McNally, for hosting Blogtoberfest12, and for posting such wonderful prompts on her blog, I Saw You Dancing. Although I didn't post on the topic for today, I did post! This daily blogging has awakened me, gotten me back in the writing flow!
Posted by Ruth Schowalter at 10/30/2012