REVERB10: HALLELUJAH FRIENDSHIP: WE ARE NOT ALONE 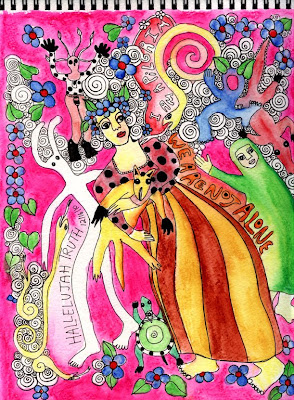 Hallelujah for FRIENDSHIP! During 2010, I deepened many “human” friendships and have written about them in my blog, Coffee with Hallelujah. Today, in response to the prompt challenge for REVERB10, I am posting a Hallelujah Truth image, one that is populated with my “imaginary” friends or fragments of my psyche.

Each morning during 2010, I sat down with my coffee, watercolor pencils, crayons, paper, and micron pens. NO WORRIES—I accepted whatever image came to me. I was not concerned about “invention” or “novelty.” Instead, I invited images to reappear as frequently as they would like.

While entertaining Wandjina, Green Mother, Turtle, Snake, Spiral, Crocodile, Wallaby, I met new characters: Rabbit Ears and Leaf Head. Sometimes, I consciously invited images to join us. For example, during the month of March, I was tutoring English to Tenzin Norbu, a master Thangka painter from the Norbulingka Institute in Dharmsala. In exchange for the tutorials, I attended a Saturday art class at the Carolos Museum at Emory to practice Thangka painting. When Tenzin Norbu left Atlanta, he gave me a book with grid-lined images of Buddha. For the mornings that followed, I began my Hallelujah drawings with one of these images of Budhha. However, Buddha did not linger to have coffee with me in the mornings or become part of my psyche.

The three images that grew closest to my SOUL in 2010 are Wandjina, Wallaby, and Green Mother.

Each time I draw Wandjina, I am reminded of the BALANCE to my feminine nature. With his masculine energy, Wandjina gives me strength and force to take ACTION, to be BRAVE!

Wallaby reminds me of my VULNERABILITY. I hold Wallaby close and protect him. In doing so, I choose to be vulnerable but with scrutiny. Being open does not mean getting slammed by “soldiers of harsh reality.”

Green Mother emerged from the images I was drawing as a reflection on my female Muslim students at Georgia Tech. After repeatedly drawing women wearing hijabs, I found Green Mother. Green Mother became an abstracted form PULLing me into the UNKNOWN—part of the GREAT MYSTERY in my LIFE.

If I had to pick one FRIEND that I have gotten to know this year—it would be HER—GREEN MOTHER—GREAT MYSTERY. Our friendship has been gradual but deepened each time she appears in my drawings. Hallelujah!