REVERB10: EVERYTHING is OK: ReEnvisioning Reality through the Stories We Tell in Science and Art! 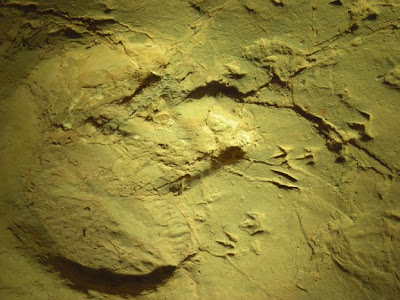 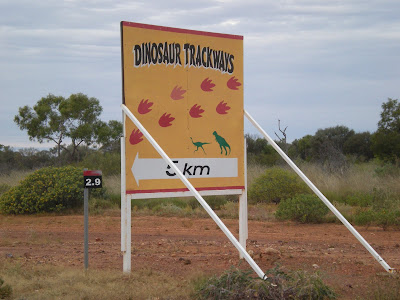 Hallelujah for REVERB10 challenging me to remember a symbolic moment of OKAYNESS in 2010! Based on NOTHING and EVERYTHING, I chose to recall Lark Quarry, a famous dinosaur trackway in central Queensland, Australia. This “hotspot” along the Dinosaur Trail illustrates beautifully how SCIENCE, ART, IDEA, and STORY TELLING collide to create a REALITY we can understand.

Okay…it all begins about 95 million years ago with a high-pitched roar and thunderous footsteps along a riverside! A monstrous two-legged carnivorous dinosaur approaches a large flock of small two-legged herbivorous dinosaurs, causing them to scatter in a chaotic frenzy. Who would be dinner? More than 3,000 of their fleeing tracks were preserved in the muddy soil, leaving an intriguing puzzle to be pieced together by 20th century SCIENTISTS.

Based on evidence and the understanding of that evidence in 1979, Tony Thulborn and Mary Wade explained the predation story above. (Click on this link to see a short video of this tracksite and hear my Chibogamoo narrate this now-well known story.) To sum it up again: There was a meat eating theropod, close to the size of a Tyrannosaurus rex, that was in search of a meal and went to the river to pick up a small ornithopod or two. A stampede ensued.

This 95-million year old story has been repeated and illuminated by ART. Hearsay is that when Steven Spielberg was making the movie, “Jurassic Park,” his consultant, celebrity paleontologist Jack Horner, referenced Lark Quarry. Another example is the movable metal dinosaur sculpture in the exhibit at the Lark Quarry Interpretative Centre. Exhibit viewers can push a button which causes the mechanical sculpture to open its toothy carnivorous jaws—jaws convincingly capable of consuming a dinner of small dinosaurs. Other art illustrating the story are the wooden cutouts representing fleeing two-legged dinosaurs the size of chickens. The educational material at the centre even goes so far as to give one of the vulnerable ornithopods a name, “Ollie.” 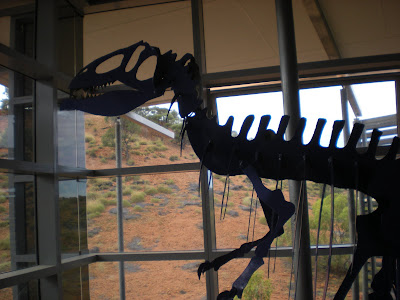 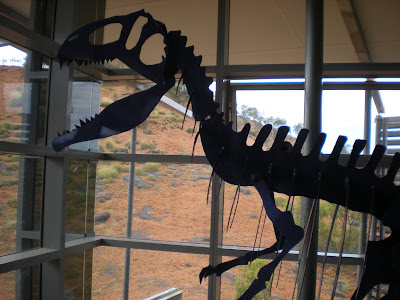 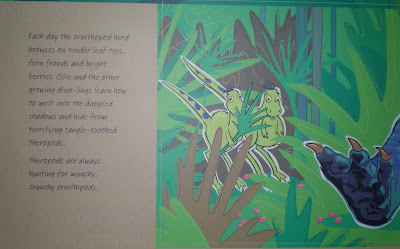 ART is wonderful for holding ideas—until these ideas change. Welcome to the 21st century and a different way of interpreting the evidence! Based on measurements and complex calculations, paleontologists can now better determine if the fossilized tracks are those of an ornithopod (a plant eater) or a theropod (a meat eater).

Last July, when we saw Anthony Romilio, a PhD candidate at the University of Queensland, standing on the Lark Quarry floor in his stocking feet with measuring tools, little did we know that he was about to TRANSFORM the long-standing predation story. And he has!

Using current methods of calculation, he has startling evidence that the large dinosaur, which caused the stampede at the riverside, was not a carnivorous theropod! It was a large herbivorous ornithopod, which was not looking for a meaty meal. (Read the news story at this link, to learn more.)

The Lark Quarry site most be RE-STORIED in ART. What will the new images look like? Will the large moving metal dinosaur sculpture have to be removed? Will the educational images on the signage at the interpretative centre change? Will the dinosaur museum at the Corfield and Fitzmaurice building on Winton’s mainstreet have to change its dramatic Lark Quarry diorama showing a victimized ornithopod? 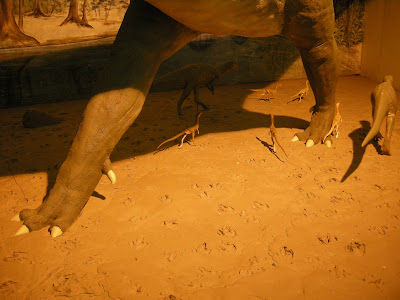 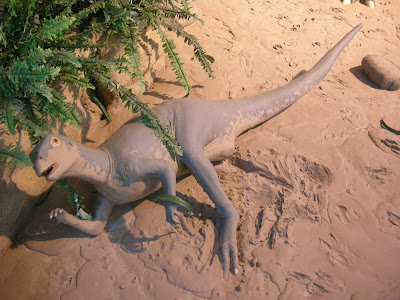 SCIENCE and ART! IDEAS and STORIES! REALITY! I am OKAY now and forever as long as ALL of us PILGRIMS travel with open minds and hearts—changing our stories as we need to in order to reflect REALITY as we understand it NOW! Hallelujah Truth!

Hallelujah welcomes all PILGRIMS to soul blog with her on December 24th’s REVERB10 PROMPT for today! Everything's OK. What was the best moment that could serve as proof that everything is going to be all right? And how will you incorporate that discovery into the year ahead? 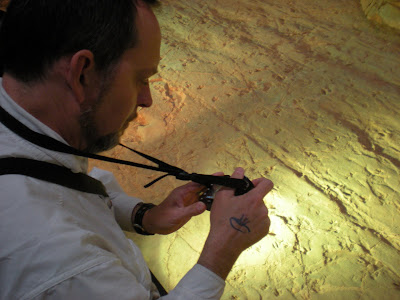 Chiboogamoo has written about Winton and paleontology in his blog, The Great Cretaceous Walk, and has an upcoming blog specifically on Lark Quarry, so stay tuned! 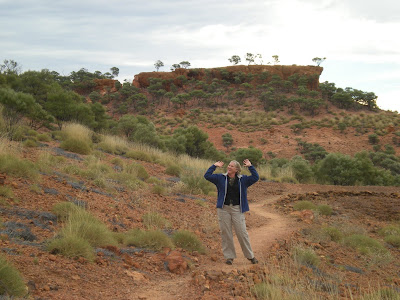