REVERB10: REMEMBRANCES OF CELEBRATIONS, BOTH LIFE AND DEATH 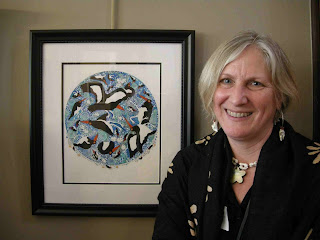 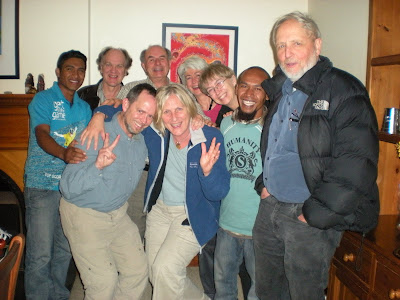 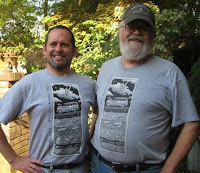 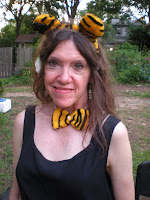 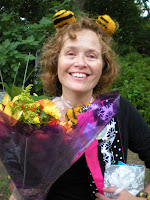 Hallelujah to CELEBRATIONS! In 2010 there were gatherings to commemorate birthdays, retirements, paleontological friendship, and death. (In one of these photos, you will see me standing by a painting of mine about the Life and Death cycle of the American Oyster Catcher, inspired by Jennifer Hilburn, ornithologist at St Catherines)

In Decatur, Georgia, my Chiboogamoo partied for three nights in a row during the week of April 15th to acknowledge his half-century presence on this planet. We went from a neighborhood drop-by with beer, pizza and world music playing on the boombox, to Friday night drinking beer in Emory Village at Everybody’s with colleagues from the Department of Environmental Studies, to a bonafide bash on Saturday night with Greek food and performances of poetry, song, and drama provided by birthday guests from multiple layers of my brilliant husband’s life.

A little more than a month later, another decade birthday rocketed in Candler Park, 3 miles down the road in Mulberry Fields Community Garden with the cooing of nesting chickens and goats. To celebrate Jesse Bathrick and Lesly Fredman, cool, creative tigresses and newly minted 60 year-olds, everybody ate potluck dishes of fresh vegetables and fruit from the Dekalb Farmer’s Market served in large ceramic bowls. We danced to the Band of Desperate Men and drank cold white wine and beer. I left before the fireworks!

June brought a heart-wrenching celebration—a commemoration party to honor my best friend Jane’s husband, Luis Caamano (my friend too—see Hallelujah blogs). Loved and admired by his Dominican community, workplace colleagues, golfing companions, neighbors, and fellow martial artists, Luis was remembered magnificently at the Sung Ming Shu Dojo in Grant Park. Long tables were weighted down with homemade sandwiches, dips, beans, sweets and alcoholic beverages provided by one of his best friends, owner of the Candler Park Market. His mother Juanita, son Eddy, and close friends told stories about him that had us weeping and rolling on the floor with laughter! His dojo awarded him his black belt posthumously, only after they had taken the test in “proxy” for him. He would have received this black belt within weeks of his death. Photomontages encapsulated Luis’ 47 years of life. Most amusing of all was a video of him belly dancing with his close Dominican friends.

Oh! I could go on and on about the festive gatherings of 2010! At the end of June, there was the paleontological party that Mike and Naomi Hall gave for my Chiboogamoo and me in Melbourne before we headed off to do fieldwork along the coast of Victoria. We were hosted with much good cheer the evening of the same day that I arrived in Australia. My jetlag in conjunction with the red wine served with spicy homemade Indian cuisine left me in a somewhat elated and exalted state! For those who are crazily insane about the Cretaceous, the conversation couldn’t have been better! In addition to graduate students and the exceptionally talented paleo-artist Peter Trusler, Tom Rich, from the Museum of Victoria, was there with his wife and collaborator, Patricia Vickers-Rich, paleontologist at Monash University and director of its Science Centre. I never ceased to be amazed how shared interests create such excellent camaraderie. Chiboogamoo and I were Americans enfolded in warm Australian paleo-hospitality!

Later, at the end of the summer, once we had returned to the US and back to our respective schools, we applauded close friend Judy Carpenter for “not” going back to work at her retirement party. Champagne was consumed in large amounts.

I will conclude my memories of celebrations with one that takes all the air out of me. Unfortunately, my community had another dear friend to say good-bye to. On September 11, we mustered together bouquets of rosemary, sunflowers, zinnias—any fragrant living plant we could take from our gardens to honor Sally Wylde’s life at the Oakhurst Baptist Church. After songs were sung and stories told, we paraded to the Oakhurst Community Garden carrying puppets of cardinal heads, butterflies, and whimsical animals as well as Sally’s artwork on sticks. The paraders were accompanied by drumming and then a New Orlean’s style-band. Some of us danced because Sally would have liked us to! At the garden, we ate potluck dishes and drank wine and beer as the sun set and the white Christmas lights strung about the garden illuminated us all.

2010 was filled with Loving Celebrations of LIFE and DEATH. Hallelujah for friends and community to laugh, sing, cry, and dance with! 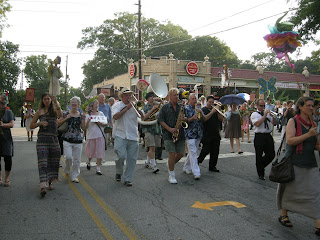