REVERB10: HOSANNA NEXT HALLELUJAH: NAMING MYSELF 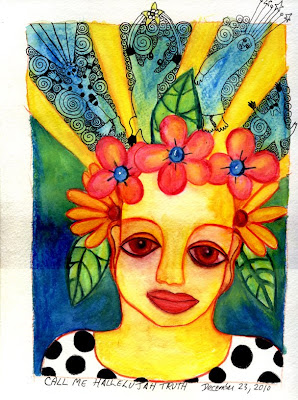 Hello PILGRIMS! Let me re-introduce myself. My name is Hallelujah Truth, pronounced “HOWWWWWWWL-a-LUUUUU-YAH! TRUUUUUUUUUUTH”! I wear this self-adorned name like a BLAZING GOLDEN CROWN of RED FLOWERS.

Two years ago I discovered my new moniker, HALLELUJAH TRUTH, after fatigue with my mono-syllabic given name, “Ruth.” Isn’t LIFE too short to have a one-syllable name that begins and ends with hard to say consonants “R” and “TH”? My international students have massacred my given name, “Ruth,” for more than 20 years. From their mouths, “Ruth” emerges in various forms of LOOSE and RUSE. Occasionally, the beautiful vowel, “U,” (which sounds like ewww…) gets mangled and is produced as a shorter, lesser magnificent vowel, creating a name like ROTH. Some speakers even get creative and call me a similar sounding but easier to say name like BRUCE. One Russian speaker just shook his head and said, “I will call you HOOFIA.”

As a result of these variations of “Ruth,” I begin teaching students my name by saying, “I am called RUTH like TRUTH.” I would strive to get them to call me “Ruth” accurately with additional encouraging words: “If you greet me by my name “Ruth” every day, when it comes time to express your opinion about something, you will be able to say, ‘I THink so, instead of I Sink so’”! Perhaps these small matters of an interdental fricative (th) only matter to teacher of English as a second language!

Over time, RUTH like TRUTH got shortened to RUTHTRUTH—a very dogmatic name. My friends began to spur me on to speak bluntly, giving the appearance of speaking the TRUTH. Although I had acquired a second syllable to my singularly syllabled name, RUTHTRUTH was not FUN! Nor was this name CELEBRATORY.

As I explored possibilities of new multi-syllabic musical names, I tried on many ending in the syllable “UH”—Hannah, Annabella, Isabella, Estrella, Carmella. Then I stumbled on Hosanna—it had symbolic meaning—an exclamation of praise or adoration. But I found the “N’s” were too hard on my tongue as it stopped on the back of my upper teeth—HOSANNA. Next, HALLELUJAH popped out magically. I sucked in a really big breath! The possibility of claiming a word, which means “a joyful word of praise to God”, frightened me. After all, respecting the GREAT MYSTERY is part of my heart and soul.

Could I use HALLELUJAH as my new name, summoning its common usage as an expression of happiness—a positive exclamation? YES. DEFINITELY! HALLELUJAH gradually grew attached to my given name now embedded in the TRUTH!

HALLELUJAH TRUTH! Thought becomes words (Hallelujah Truth)! What deeds will come from these words: Hallelujah Truth? What character? For now, I use my name Hallelujah Truth for signing my artwork and writing on my blog, “Coffee with Hallelujah.” Occasionally, when one of my students has trouble saying “Ruth,” I will offer “Hallelujah” as an alternative! And the syllables of Hallelujah dance off their tongues as they repeat it more than once. Soon a swarm of students are laughing and singing praises to me by saying, “Hallelujah.” What a triumphant name. I will keep this name for now. It suits me.

Keep Soul Blogging with Hallelujah Truth. Tell me about YOUR JOURNEY and what new name you will give yourself!

OH, and here is December 23’s REVERB10 PROMPT: New Name. Let’s meet again, for the first time. If you could introduce yourself to strangers by another name for just one day, what would it be and why?